I'm pleased to be hosting prolific mystery writer, F.M. Meredith, sometimes known as Marilyn. Please be sure and notice the comment at the bottom about her contest!


Places I’ve Traveled as a Writer

Never would I have gone to Anchorage, Alaska if it hadn’t been for Left Coast Crime first and a few years later, Bouchercon. The first time, I also visited a school in a tiny village called Kwithlik. To get there, I traveled in a Suburban on a frozen river. (Scary!) The second time, I stayed in Wasilla with a Native friend who I met on the first visit.

My first and only trip to New York City was to attend Edgar week and the Edgar awards. I was in awe the whole time I was there—it looks just like it does in the movies and TV.  (I know that sounds dumb, but I couldn’t help just staring at everything that seemed so familiar.) From there, my friend and I took the train to Washington DC and then on to Arlington, VA for Malice Domestic. I attended Malice a second time and included a visit to my husband’s hometown in Cambridge MD.

When I was asked to be an instructor at the Maui Writers Retreat, I didn’t hesitate a moment to pack my bags and jump on a plane. Of course I took hubby too, and he had a great time while I was busy working with students all day. Besides being in a beautiful place, I had a great time. 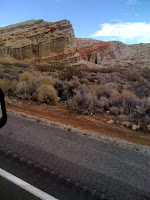 We fell in love with Omaha NE when Mayhem in the Midlands (now sadly no more) met there for ten years.

Though I may have visited Las Vegas and Reno NV with my hubby, I’ve also gone there for writers’ conferences.

I’ve been to one end of California (Crescent City and Redding in the North, to Temecula and Dana Point in the South) and from coast to coast, giving talks at writers’ conferences and attending Left Coast Crimes and Bouchercons.

Now I’m back on the road again to promote the latest in my Rocky Bluff P.D. series, Dangerous Impulses. I’m headed to Epicon in Vancouver WA this month. and have various places in California to go. In July it’ll be off to Vegas for the Public Safety Writers Association’s annual conference.

Thank you, Kaye for letting me tell you about places I’ve been. It’s been a wonderful experience with great memories.

Now a bit about Dangerous Impulses:

An attractive new-hire captivates Officer Gordon Butler, Officer Felix Zachary’s wife Wendy is befuddled by her new baby, Ryan and Barbara Strickland receive unsettling news about her pregnancy, while the bloody murder of a mother and her son and an unidentified drug that sickens teenaged partiers jolts the Rocky Bluff P.D.
Buy it here: http://tinyurl.com/byxomtk

The person who comments on the most blog posts on this tour may have a character named after him or her in the next Rocky Bluff P.D. crime novel or choose a book from the previous titles in the Rocky Bluff P.D. series in either paper or for Kindle.

Though each book in the Rocky Bluff P.D. series is written as a stand-alone, I know there are people who like to read a series in order. From the beginning to the end:

F. M. Meredith’s Bio:
F.M. is also known as Marilyn Meredith, the author of the Deputy Tempe Crabtree series. She first became interested in writing about law enforcement when she lived in a neighborhood filled with police officers and their families. The interest was fanned when her daughter married a police officer and the tradition has continued with a grandson and grandson-in-law who are deputies. She’s also serves on the board of the Public Safety Writers Association, and has many friends in different law enforcement fields. For twenty plus years, she and her husband lived in a small beach community located in Southern California much like the fictional Rocky Bluff. She is a member of three chapters of Sisters in Crime, Epic, and Mystery Writers of America.