Thoughts on This Week 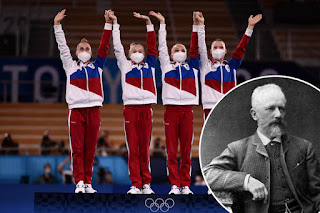 I guess my thoughts are on Russia today. You might not understand this without a few words about my background. I majored in Russian Studies at Northwestern University for a reason. One reason was that I couldn’t really major in Russian, per se. I knew I would never be proficient in the language in the three years I had left in college when I changed my major.

My interest in the country, which was then USSR, was in the culture. As a classical violinist, I had fallen in love with Russian classical music, and loved the more contemporary composers, too. Tchaikovsky, Rimsky-Korsakov, Mussorgsky, and also Rachmaninoff, Stravinsky, Prokofiev. Even if I do still have to look up the spellings.

Also, as a reader, I was just as deeply in love with Russian classical literature, Dostoevsky, Pushkin. Tolstoy, Chekhov—and many, many more.

An anecdote from my college years. I was reading Crime and Punishment in paperback on the El, on my way to a horrible telephone soliciting job (I attended school on a partial scholarship and worked whatever jobs I could find). Coming back to my dorm from the job, I had to take a bus, and two trains, one underground and one elevated. When I changed trains, I had to cross the street and go up the wooden stairs to the El platform. I did this, got on my train, and buried myself in my book. Eventually, something made me look up. The conductor was calling out street numbers, not street names. I was one of two white people in the car. I asked the woman next to me if this train goes to Evanston.

“Oh, honey,” I can still hear her alarmed voice. “You’re on a southbound. You need to get off and change trains.”

I went to the door and got off at the next stop. I needed to cross the street to get to the northbound elevated platform. Two large Black men were concerned about my safety and they accompanied me to the steps, for which I was grateful.

Back on the train, going the right direction, I buried myself in Dostoyevsky again.

Maybe that’s why the plight of the Russian athletes at the Olympics affected me so profoundly when the “ROC” team wins and the Piano Concerto #1 is played. Honestly, it moves me to tears. I never equate the politics of a country with the people. They have endured so much, those people.

Posted by Kaye George at 8:29 AM No comments: