Happy Year of the Pig!

According to the Chinese Zodiac, which, for some reason, I always consult for the New Year, 2019 will be The Year of The Pig.

The official site says that Pig is the 12th and last of the zodiac animals. (In 2020  we start over with rats, so enjoy the pigs.)

The legend is that the pig has to be last because he was the last to arrive for the party that the Jade Emperor gave. I guess Jade gets to decide these things. Pig was last because he overslept, according to one version.

I was surprised to see the other version: Pig was late because a wolf (not a zodiac animal, poor thing) destroyed his house! He had to rebuild it, but it must not have taken long, because he did make it to the party. My surprise is because of the similarity of our Three Little Pigs story, the wolf trying to blow down the pigs’ houses. Wolves really have it out for pigs!

Anyway, I hope you have a bright and shiny New Year. Pigs are a symbol of wealth and good fortune, and I wish that for everyone reading this! (And for me. Why not?)

all photos from morguefile.com

I’d like to draw your attention to the next tab, where I’m making a call for submissions. You can click on it, or I can repeat it here, since it’s short:

Do you think this is doable or not? I’m thinking some short little pieces, satire, irony, humor, that kind of thing. But a story, not just a joke.

I have no idea if it’s a good idea or not, which is why I added the alternative of a flash fiction piece, but one containing some of the infamous blunders we’ve all gotten so much amusement from, and have gotten so used to.

The deadline is set way out in June, since I have a whole bunch of stuff going on early next year and won’t be able to deal effectively with this until then.

Someone mentioned that they wanted to know what the payment was (LOL!). I’ll let everyone know what the terms are when I secure a publisher, but, until then, you can assume the payment is either a contribution to a charity or a percentage of the take. Since I want short pieces and will, I hope, be able to accept a lot of them, the pay probably won’t buy you a small order of fries. Consider the payment your satisfaction on a job well done—and exposure. We’re writers. We’re used to not making money, right? 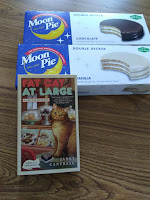 I’m going to take a short cut this week and refer you over to my Killer Characters blog. I’m running a giveaway that will end the night of the 6th, so you have time to enter!

While you’re there, check out some of the other giveaways that might still be current. Everyone on the blog is doing these for our Season’s Reading project. It runs until the 14th. A new one every day.

I hope you’re surviving this hectic time of year! We can make it. We do every year.