Have you heard this term, Street Team? I first heard it only a few weeks ago, although I think it’s been around a bit longer than that. Now it seems to pop up all over the place. 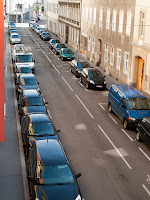 No, it’s not a gang. Well, it’s sort of a gang, but a good one, not a bad one. No tattoos or felonies required.

The originator of a Facebook group, Murder and Mayhem Cozy Mysteries, a gal who calls herself Southernstate of Mind, stepped up and offered to be a member of my street team. However, I didn’t really have one before that moment. Another reader and reviewer offered to distribute my bookmarks after reading my books, then another. Now, I’m looking for more members!

What do you have to do to be a member? You have to like my books. If I haven’t written anything you like, that sort of disqualifies you. So, IF you do like my books, it requires telling other people about them, talking them up, suggesting them to mystery readers, and handing out bookmarks to interested people. I, of course, will supply the bookmarks. You should probably be getting my newsletter (where I think I’ll repeat this information). Lastly, you have to let me know you want to do this. (Email me at kayegeorge@gmail.com)

Since I have three series currently in publication, I hope that you like at least one of them. For the Imogene Duckworthy books (3 are published, all by me), I have bookmarks with all three covers on them. For the Cressa Carraway Musical Mystery series (1 is published by Barking Rain Press with sequels in the planning stages), the bookmark has the one cover. This bookmark was designed by the publisher and is a step up! For the first People of the Wind mystery, Death in the Time of Ice (also just one published--by Untreed Reads--sequels planned), I have postcards featuring the cover. No bookmarks for this last one since this book, at the present time, is an e-book only. My 4th series will come out next year, the Fat Cat series, but it’s humming along on schedule so far.

Other optional activities are leaving reviews on Amazon, B&N, Goodreads, and the publishers’ sites; including mentions in blogs, if you have them; asking local bookstores and libraries to carry my books (it’s awfully hard to get the big ones, B&N and Books a Million, to go for this, but local, independent  bookstores are more receptive).

If you’d like to promote one series, or all three, I can mail you 10 or 20--or 30--bookmarks or postcards for each and would love it if you could hand them out and say a good word about Kaye George books. A discussion is underway on one of the online lists I belong to about swag for street teams. I’m thinking of having drawings for things. Maybe tee shirts (mugs? tote bags?). That means I’d have to design something.

[or clever saying]
Mysteries to Die For?
Books You’re Dying to Read?

Maybe less emphasis on the death of the reader would be good.

Any and all ideas greatly appreciated!

EINE KLEINE MURDER came out in April from Barking Rain Press and I’m thrilled with the reception it’s getting. (Details are at the “Eine Kleine” tab above, as well as on my Novel webpage.) This book incorporates my love of music with amateur sleuthing, and uses the area where I grew up as setting.

Now, as of yesterday, DEATH IN THE TIME OF ICE is published by Untreed Reads as an e-book! Since this is a Neanderthal murder mystery (and since the title doesn’t fit on the tab), the details for this project are at the “Neanderthal” tab above. 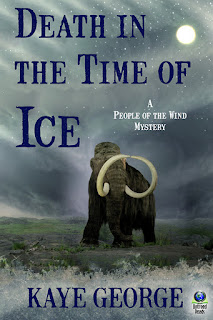 This isn’t the one and only Neanderthal mystery, but I can only find one other, HYAENAS by Sandy Dengler. It’s out of print, but I found a used copy and have read it. It takes more of a comic approach than I’ve taken with my novel.

I tried VERY hard to stick to the latest scientific findings. Believe me, that’s not easy, because new findings are being made constantly about these people who haven’t been here in 28,000 years.

However, to make the story I wanted, I did take some liberties. Some of these aren’t even liberties, since pros and cons are debated about almost every aspect of their lives. That’s great for me. I just choose the scenario that fits best for my purposes.

This tribe is matriarchal. The leader is a wise woman, as is the healer of the tribe. My reasoning on this is thus: at that time in history, people didn’t know the details of conception and eggs and sperm and genes. My thought is that you would always know who your mother was, but might not know who your father was, if couples weren’t mated for life or weren’t always together. It’s possible that people wouldn’t even know a male had to be involved, but I let them know this.

They throw their spears. Most researchers do think that Neanderthals did not throw spears, but thrust them instead at the large prey when they were close enough to do so. The evidence is the many injuries to the bones that have been found. Hey, I figure you can get injured by those beasts even throwing spears. They were so much more muscular than we are, that I gave them that ability.

The woman throw the spears. The men were probably stronger--they always have been. So I saved them for butchering and cutting the meat to haul back to the living quarters. The females, lighter and quicker, and maybe more stealthy, were the ones to sneak up on the animals and spear them.

They speak. This was debated for a long time, but it’s now believed very possible that they had at least limited speaking abilities. There is some genetic and physical evidence for this. The social evidence is, to me, less compelling. The argument for that says that they had to communicate with each other with some sophistication in order to successfully hunt the animals they did. However, wolves do pretty well without spoken words. Besides, since the brains of the Neanderthal were larger than ours, I gave them a bit of heightened sensory ability--plus telepathy. They use speech for formal occasions, such as announcements by the leader of decisions that affect the whole tribe.

They are in North America. Wait, don’t laugh. The theory that humans came from Asia over the land bridge 10,000 years ago is eroding. For one thing, it would be unprecedented for humans to spread all the way to what is now Patagonia in the time period required, given the age of human remains there. So maybe they came over much earlier. For another thing, some South Americans seem closely related to Africans, meaning they probably came across the Atlantic. Neanderthals are still being discovered in areas no one has found them in before. Anyway, just because we haven’t found their remains on this continent, doesn’t mean they weren’t here. Is anyone looking for them? Just to take care of this detail, I gave them a death/burial ritual that would explain the absence of remains.

I’ll tell you the real reason I put them in North America. I wanted to write about the mega-fauna that existed here until 10,000 years ago. I love those dire wolves, flat-faced bears, mammoths, camelops, giant sloths and giant beavers. It’s VERY fun to include them.

This is the research page created by my web designer a few years ago. I haven’t gone over it for updates lately, but I’ll tell you this. I recently read a book called CRO-MAGNON by Brian Fagan, published in 2011, a mere two years ago. He positively states that all experts agree that Cro-Magnons and Neanderthals did not mate. Today, it’s a known fact that they did! A relative of mine has had her DNA analyzed and has found that she is 2.5% Neanderthal. My own results should be ready soon!

I think a lot of artistic leeway can be taken in writing about these fascinating people, and I took it. If you’d like a small sample of my book, take a look at http://store.untreedreads.com/index.php?main_page=product_info&cPath=6_158&products_id=969. The book is on an introductory sale, and my short story, THE BAVARIAN KRISP CAPER, will be thrown in free.
Posted by Kaye George at 4:00 AM 11 comments:

A few more daylilies have opened. Some in the back. 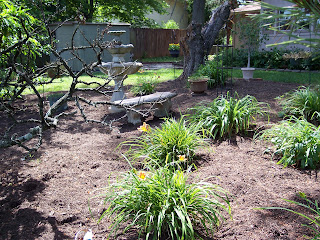 Some in the front. 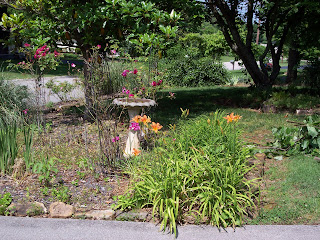 I found these cute little mushrooms today. I know they don’t stay around long, so I snapped their picture while they were posing. As a mystery writer, I supposed I should know whether or not they’re poison, but my mushroom book isn’t unpacked and I have no idea. We won’t eat them. 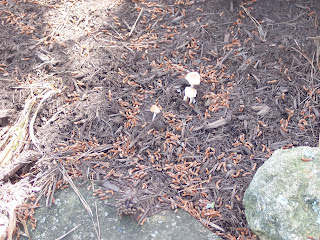 These are the oddest plants I’ve seen in this town. I saw some in another yard a couple of weeks ago and I was delighted when they sprang up here! They look like candy corn to me. 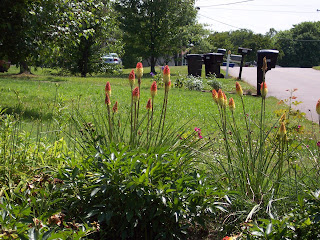 Here’s what’s coming up next. More daylilies and some, well, I don’t know if that’s a yucca or a century plant. I’ve never had either in a yard. We’ll see! 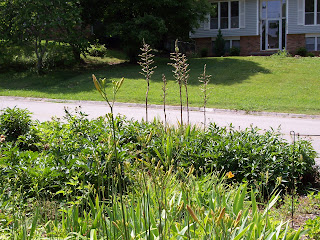