I’m away again, this absence unplanned. A grandchild is deciding, six weeks before he’s supposed to be born, to give his mother, my daughter, a hard time. She was put on bed rest last week and I flew to help out with the toddler on Saturday, the 9th.

Hubby alerted me to what was going on in the yard just before I started packing on Friday, so I had to snap a few shots of the blooms, and one of the woods. Here’s what our new place looks like out back: 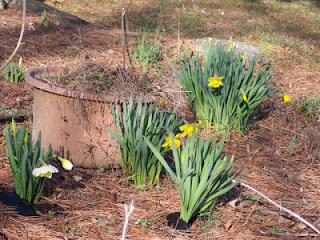 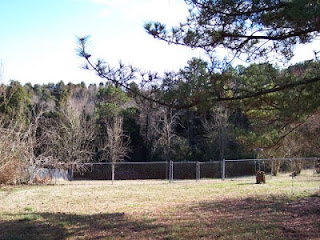 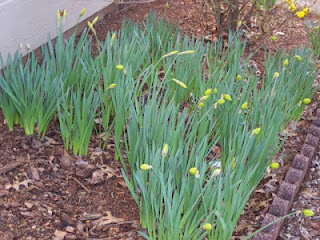 [[We’re probably all moved to Tennessee by now, but I’m posting this to give myself a breather while I get organized in my new life. This is not a repeat, but follows the two previous “process’ posts.]]

It’s taken me quite a while to evolve my own editing process. Some of this probably overlaps just a bit with plotting because my stories evolve as I go through the writing of them. I use pieces of information from classes that I’ve taken over the years, extracting what I know will work for me.

I like to get a full read from someone who hasn’t read my manuscript before. These people can catch things that my regular critiquers, who have been giving me feedback as I write, might overlook because they already know the story well.

Some typical catches are, for a continuing series, not explaining who characters are or describing them enough when they are continuing characters. In case someone is reading one of my books and hasn’t read the others in the series, I don’t want them to be confused and lost!

Other good catches are having five- or eight-day weeks, thirty hour days, going for twelve hours without eating, or having characters be where they can’t be, considering I put them someplace else at the same time.

Next I make sure there are hooks where they need to be, in the beginning, at the end of the first chapter, and at the ends of other chapters and, sometimes, scenes. (Some editors want a hook at the end of each and every chapter, some don’t.)

I try to use one of  Harlan Coben’s devices (a writer I admire incredibly) somewhere in the first chapter, preferably in the first three pages or so, of doing a repeated word, at least three times, for emotional effect. Here’s an example: http://www.margielawson.com/deep-editing-analyses/27-harlan-coben-hold-tight

What I do, when I have the plot all straightened out, is print my pages and get out a set of highlighters. I do a modification of Margie Lawson’s Deep Edits system. I highlight descriptions in green, dialogue in yellow, emotional reactions in pink, and put orange lines in the margins by escalating tension. I underline, at the beginning of each scene, things that tell me where and when it takes places, making sure I’m grounding the reader for that scene. I then underline, in red, each instance of using four of the five senses: smell, touch, sound, and taste. I assume that sight is taken care of in descriptions.

When I think those things are balanced out, I bring up my document on one screen and open ReadPlease in another. I paste each chapter, one at a time, into the provided place, and let the program read my prose out loud to me while I follow along in the document. When I catch an error, or an awkward passage, I flip over, pause the reading program, and fix the problem.

Then I put it away for a week or two, print it out again, and read it through, hoping I still like it!
Posted by Kaye George at 4:00 AM 5 comments: