I guess I leaped right past last Wednesday and didn't post here. Today is a new day! And it's Leap Day! That makes it Sadie Hawkins Day, too.
According to this site (http://www.cryptomundo.com/cryptozoo-news/sadie-hawkins/), Sadie's Day had it roots in Scottish and English law from the thirteen century. Normal laws didn't apply on February 29th and, specifically, a woman could ask a man to marry her on that day. There was even a penalty for refusing! 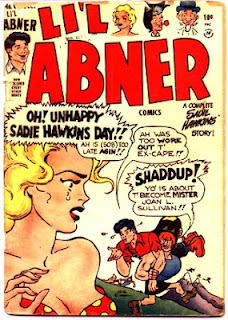 Sadie's Pa, a creation of Al Capp in his comic strip, Li'l Abner, despaired of her ever catching a guy, especially after she reached the ripe old spinster age of 35. He lined up the bachelors and told them to run when he fired off his shotgun. Sadie would run after them. "Th' one she ketches'll be her husbin." The other spinsters of Dogpatch liked the idea so much, it became an annual tradition. Capp's original celebration didn't take place on Leap Day, but it should've.
Posted by Kaye George at 5:00 AM 3 comments:

I am super, super thrilled to be on this list! Everyone here has worked hard for the honor and I wish everyone the best at the Malice Domestic Convention in April. This is the link to the announcement page. http://www.malicedomestic.org/agathaawards.html
Posted by Kaye George at 12:19 AM 4 comments:

I recently found out the Geoffrey Chaucer had something to do with associating the day commemorating the martyr(s) St. Valentine (there were a few of these) with romantic love. Modern Islam countries forbid celebrating the day, but this had reportedly resulted in a black market for roses. I think that's sweet. Love triumphs.
Enough has been written about the origin of the holiday and about the various saints responsible, though. I'd like to delve into something peripherally related, Hallmark.
The word itself means a mark put onto a piece of metal certifying it's value or pureness. The marks used to be made with steel punches, but lasers are now used, especially with delicate pieces. Different marks are used in different countries, and they've changed through the ages.
Since 1973, most of Europe has used standard CCMs, or Common Control Marks. According to the wikipedia article at http://en.wikipedia.org/wiki/Hallmark, the"" multi-tiered motif of the CCM is the balance scales, superimposed, for gold, on two intersecting circles; for platinum, a diamond shape and for silver a mark in the shape of the Latin letter "M"." My gold wedding ring has some kind of tiny symbol, but even with a magnifying glass, I can't tell what it is.
Hallmark Cards, closely associated with the Day of Love, had its start in 1910 in Kansas City, Missouri. Postcards were all the thing in the years before that, and the founder, a guy named Joyce Clyde Hall, decided to stock them, then to branch out into greeting cards. I think you had to make your own Valentine cards before then.
They marketed Valentine and Christmas cards at first, and were called Hall Brothers. The brother, Rollie, was responsible for marketing gift wrap. The company didn't start to be called Hallmark, though, until a few years later, 1928. They started putting their name on the backs of all their cards, like a hallmark. I believe people named Hall are still heading up the company.
Illustrations are in the public domain.
Posted by Kaye George at 5:00 AM No comments:

Hey, if you're anywhere near Georgetown, which in Texas is near Austin, stop in and see me and all the other local writers at the Hill Country Book Festival. Lots of books and a huge selection for children, too.
Posted by Kaye George at 3:00 AM No comments:

Going off on a KDP Select Tangent 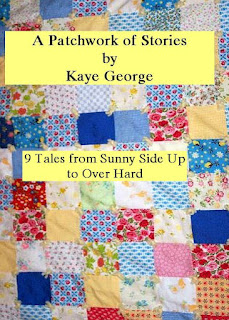 I've been watching and waiting, observing what's happening with the Amazon KDP Select program. I've see pros and cons, but finally decided to plunge in with my short story collection! The ebook version has been selling steadily, but slowly, and mostly on Amazon. I'm hoping to get more of my stories onto the ereaders of people who will appreciate them. They're a varied lot, but have received excellent reviews. One is  from PJ Coldren, whose review is on the Amazonpage where you can get your free copy today.
Kevin Tipple not only reviewed the book at Epinions, but he also counted it one his top reads of 2011!
Judy Alter also reviewed my stories at Judy's Stew.
All of this is leading up to saying that A PATCHWORK OF STORIES is FREE today and tomorrow for Kindle! If you'd like to sample my short work, which--I'll warn you--is, at times, a bit darker than my long work, here's your chance.
Posted by Kaye George at 3:00 AM 2 comments:

This article made a big impression on me.
http://www.statesman.com/news/local/forget-the-bucket-list-here-are-things-well-2133034.html
Since I've never gotten around to making a Bucket List, I thought I might do better with an Anti-Bucket one.
I have a bunch that key off my fear of heights.

(1) I'll never again tour Mammoth Cave and walk up that multi-story staircase with space where the risers should be. Especially not backpacking a 30 pound baby. (To be fair, my husband packed him part of the way.) This should maybe be a separate item, but it was in the same cave, so I'll put it here that I'll also never slide through the Fat Man's Misery with said baby in the backpack. The baby is a huge handicap because you can't bend over or go on hands and knees since the baby would fall out. You (meaning me) have to slide on your rear.
Here's a link to a picture of the staircase http://www.flickr.com/photos/ameiss/970469830/.
I have found out, though, that I can tour the cave without the staircase if I should want to.
http://www.nationalparkstraveler.com/2008/07/theres-new-way-come-air-mammoth-cave-national-park Thank God! 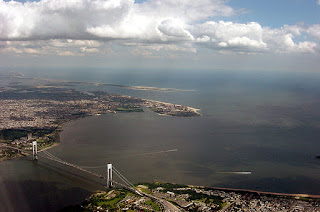 (2) Drive across the Verrazano Narrows Bridge. I almost had a heart attack. In fact, in the middle of that bridge is where I first discovered my acrophobia. If I'd never drive that bridge, maybe I wouldn't even be this way.

(3) Go on a trail ride. I love horses, really, I do. I just don't ride very well and I bounce when they trot. Nuff said. 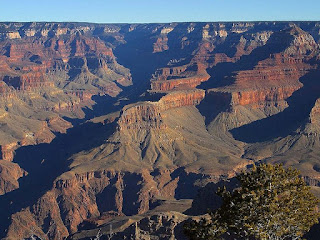 (4) Back to the heights--Hike the rim of the Grand Canyon. I'm not sure if it's the South or the North Rim, but it's the one where the trail slants into the canyon in places, where the surface is gravelly stuff that you can easily slip on. 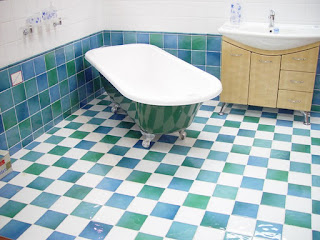 (5) Tile a bathroom. It was our first house and the tile was pink and plastic. And not in good condition. So I bought ceramic tile and the stuff you stick it up with, after pulling the old tile off. I even got a cutter for the corners. Then I started slapping the tile up. I didn't do a plumb line or measure anything, just eyeballed it. The tile turned out great. Looked perfectly straight. That would never happen again, so I won't do it again.
In spite of the heights thing, I do want to hike up to the hanging valley in the Grand Tetons. The path, which is about a mile straight up, is narrow and I have to cling to the wall on one side to keep from plummeting over the edge of the other side. That path feels about a foot wide, maybe two, and has a solid wall of rock on one side and nothing whatsoever on the other. But the reward at the top is worth even that. Just don't ask me to move to the outside if you pass me going the other way on that trail.
All photos and illustrations are in the public domain.
Posted by Kaye George at 7:00 AM 4 comments: