How can this help us? 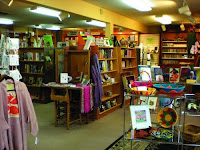 Some of my online contacts and buddies already know about my trip Saturday. The manager of Viva, a nifty bookstore in San Antonio, and I planned an event around the Guppy anthology, FISH TALES. We spoke in person, emailed back and forth, and talked on the phone. We nailed down what I should present.
Then I worked on a presentation that would go 15-20 minutes. I got it up to about 18 and figured that would work. I would speak about the history of Sisters in Crime and of the Guppies, the group that put out the anthology. Then I would go into some detail about how we planned the project and how it came together. I had gathered, from the short story authors, short passages about how they came to write their stories, and I ended with some of the mistakes that we may have made. All with the aim of helping any writers planning on putting out an anthology.

Carla Pena, the manager, had about ten chairs set up when I arrived, plus a nice sturdy table for me. I put my handouts on the table, along with some bookmarks, and a pile of anthologies, of course. She even had a pitcher of water and cups. It's still very hot in central Texas.
One person arrived. We waited a bit for the appointed time. We waited past the appointed time. Then I started in giving my talk, informally, since I was giving it to Carla, my audience of one, and my husband in the back row.
The nice woman listened intently and asked me some questions. In fact, we all four chatted through my talk and discussed things along the way. She took all my handouts and bought a book. I signed it to her sister, who owns a used book store.
OK, my first thought at the end of the day was, this was a lot of work for one person and one book. But then I remembered the eventual recipient owns a book store. She must talk about books to all sorts of people, all day long. If she likes the antho, I'll bet she'll mention it to someone.
I left five signed copies at the bookstore, so this may turn into six copies sold, not one.
The other advantage is that I have a presentation all put together that I can give again somewhere else. Even if I don't, I can use some of it elsewhere. 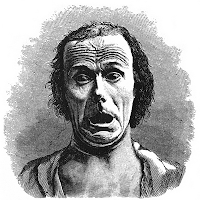 One more plus: I'm not a very good public speaker and the more I do it, the better I'll be. With such a small, friendly, attentive audience, that talk was easy to give. Maybe the next one will be, too.
interior photo of Viva Bookstore by Esme Araiza
Fear, figure from Charles Darwin's The Expression of the Emotions in Man and Animals, public domain
Posted by Kaye George at 7:00 AM 6 comments:

If anyone is in the vicinity, I'd love for you to drop in to Viva Bookstore, 8407 Broadway in San Antonio.  I'm doing a presentation on how we put our anthology together for the Guppies.

You can also pick up a copy of FISH TALES: THE GUPPY ANTHOLOGY if you've neglected to get one yet. Twenty-two tales of mystery and mayhem from the rising stars of mystery!
Posted by Kaye George at 5:24 PM No comments:

What could be better than eating a crème-filled donut? Reading a cute story about one? No, reading a donut story and eating one at the same time!
Here's your chance. My story, "The Bavarian Krisp Caper", is half price today, in celebration of National Crème-Filled Donut Day. (What a great celebration!)
And, if you leave a comment here and tell me what your favorite donut is, you have a chance to win a certificate for not one, but a dozen! Your choice, Krispy Kreme or Dunkin Donuts.  AND your pick of any story at Untreed Reads, my marvelous publisher who is sponsoring this event.
What are you waiting for? Can't pick your favorite donut? Then pick mine, Bavarian Kreme by Dunkin Donuts.
Posted by Kaye George at 6:00 AM 20 comments:

How Publishing Has Changed!

Marilyn brings a unique perspective on what's different now, having published books in the old days and now having published a few recently. She's agreed to share her experiences here and I welcome her to my Travels! 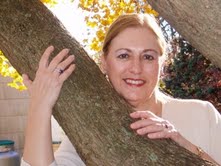 I’m no business maven, but except for the electronics industry, which introduces new apps and innovations almost on a daily basis, I doubt no other industry has changed as much as publishing has this past year--and it’s due to electronics. The advent of self-publishing via CreateSpace, Smashwords, and other companies, has turned traditional publishing upside down and inside out.


My first book, AND DON’T BRING JEREMY, came out in 1985. I wrote it on a typewriter. I wrote my next few books on a typewriter, as well. As the author of children’s books, I occasionally spoke in schools and libraries. That was the extent of the PR or publicity I was expected to do. The rest was the publisher’s domain. They sent ARCs to Kirkus, PW, ALA, Booklist, The Horn Book, and other review publications. Oh yes--I once wrote an article for my local newsletter when RUFUS AND MAGIC RUN AMOK, my fifth book came out.
This past June my debut mystery, A MURDERER AMONG US, came out with Wings ePress as an ebook and then in paper format. This time I didn’t receive an advance, and I paid $90 to have my book come out as a paperback. Wings ePress made my book available on their website, on Amazon.com, and on fictionwise.com. The rest was up to me.
Thank God for my fellow writers! Two Wings authors offered to review my book. They both read it quickly, loved it, and gave me wonderful reviews. Other writers supplied me with a list of reviewers who might be willing to review my mystery. I did blog interviews and wrote guest blogs. I learned about Murder Must Advertise and All Mystery e-newsletter, about Facebook and twitter, Book Town and GoodReads. I ordered bookmarks and business cards. Every day I learned something new and how much more I had to do to spread the word that A MURDERER AMONG US was available to readers. I had to get my name and my book’s title out there every way I could!
Coming from traditional publishing, this was foreign to me. While I love to share good news, I’m not one for calling attention to me, me, me. I’m not used to signing emails with my website, my book’s title, and where it can be purchased. Most of all, I wasn’t used to asking friends to buy my books. I was used to giving them copies from the twenty or so authors’ copies I used to receive. So many of my friends were good sports and bought copies of my book--some who live as far away as Australia and England--and I’m grateful to them.
I’ve two books coming out with Uncial Press--a ghost mystery and a romantic suspense called DANGEROUS RELATIONS. Uncial Press is strictly an ebook publisher, so I’ll put these two titles out in paper format myself. I also plan to put some of my out-of-print children’s books out with CreateSpace and Kindle.
Re-publishing and self-publishing are the wave of the future. We writers are learning new skills every day. We have to, in order to keep up with the times: making trailers and websites, using music, doing audio versions. And most of all, we must continue to write good novels.

Her most recent book:
A Murderer Among Us -- http://bit.ly/kOZgcz (Wings ePress)
Kindle: http://amzn.to/oF7t1c
Nook: fictionwise.com