I got a wonderful surprise Facebook message a few days ago! My short story, “Murder with Crow,” was accepted for an anthology called COOKED TO DEATH. No, my characters aren’t eating crow! Although the theme of the collection is cooking and murder. The recipe that goes with my story is a zucchini bread recipe, the best one I’ve ever run across. I’ve had it many, many years and it includes a secret ingredient. (I’ll post a picture of the cover as soon as I get it.)

This tale is much lighter than the one that’s in MEMPHIS NOIR. I got my 2 author copies this week! So I do have a picture of them. I got the best review I’ve ever gotten in my life of my story, “Heartbreak at Graceland.” That’s because the review is in Publishers Weekly and it mentions me! (a powerful and definitely dark narrative) Here’s a link.

I have my short story crit partners to thank for polishing the Crow story, and the authors of HEARTACHE HOTEL, by Henery Press, for extra-special guidance about Graceland.

I love how mystery writers never have to be alone—the most giving people ever.
Posted by Kaye George at 1:00 AM 4 comments:

I haven’t been posting here much, have I? There’s a good reason for that. Summer and I don’t get along. I hate being in the sun, hate being hot, hate sweating. It’s a good thing I have an indoor job!

I’ve been keeping cool by working on DEATH ON THE TREK, the 2nd Neanderthal mystery that takes place at the beginning of the last Ice Age. And I have a fan blowing on my feet.

It’s almost time to open up the windows, though. The bedroom window was open last night to a delicious 54 degrees, which brings the bedroom into the low 70s. Not much circulation in that room, I guess.

Right on schedule, I got a summer cold that worked its way into bronchitis. I think I’m on the mend. Wouldn’t you know, my favorite season, fall, is the one I’m the most allergic to. It’s guaranteed to be beautiful here in the foothills of the Smokies. Can’t wait for the leaves to turn. Some are tinged with color already.

Also, right on schedule, I hope to finish up my last edits before DOTT goes out to my readers, and just at about the same time I get my editor pages for the third Fat Cat book. I love it when a plan comes together.
Posted by Kaye George at 1:00 AM 4 comments:

I'm so pleased to welcome Linda Thorne to my travels. Speaking of travels, like us, she has moved around the country a LOT and has ended up in Tennessee. Small world! She's tackling the question that readers seem to love to ask us.


Where Do You Get Your Plot Ideas? 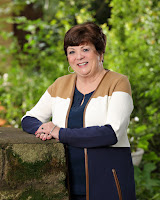 I remember reading an article by Lawrence Block years ago. Block heard that Don Westlake had written the beginning chapters of a book about a woman being raped on her wedding day. The woman and her husband then took off after the rapists to exact revenge. Block saw this as an interesting plot and, when he didn’t see any further development on the book, he contacted the author and learned Westlake had decided against writing it. Block then asked, and got approval from Westlake, to use his idea. He wrote the book and titled it, Deadly Honeymoon.

This fascinated me because I have so many ideas for books tumbling around in my head, I can’t imagine anyone needing to borrow someone else’s. Of course, I’m no Lawrence Block who has written so many books, but I still don’t think I’d run out of ideas.

And, I may not be alone. Three or four years ago at the Killer Nashville Conference there was a session called something like, “where to get ideas for your writing project.” I crossed that one off my program and circled a query letter session next door.

I was running late for the meeting and when I walked into what I thought was the right room, I noted only two other guests in attendance. One of the speakers mentioned how surprised he was more people hadn’t shown up since coming up with ideas was important in writing about anything. It dawned on me  that I was in the wrong place and hesitantly I raised my hand halfway, saying in a whisper, “Sorry, I thought this was the query letter session.” The man smiled and shrugged his shoulders. I think I bleated the word, “sorry,” once more telling the small group how bad I was at query letters. And, truth be told, if I hadn’t been so desperate to improve my queries, I would’ve stayed just because they seemed like nice people who were quite disappointed in the turnout.

I’ve never seen the topic on any Killer Nashville schedule since.

Just think about it. How many times do you hear someone say, “I should write a book.” Every unusual or meaningful experience we each have, news reports, things we witness, experiences and events every single day could be book topics, right?

What do you think?

At long last, she lands a job with a good employer, but the trouble is just beginning…

Human resources manager Judy Kenagy hopes her days of running from bad bosses and guilt-ridden memories are over. But alas, she’s barely settled in when a young female employee is found shot to death, spinning her new workplace into turmoil. Small-town police chief, Carl Bombardier solicits Judy’s help in her role as the company’s HR Manager. While working with Judy, he shares his fanatical interest in a twenty-five-year-old double homicide he believes is linked to her last and worst bad boss. To make matters worse, the trusted assistant of her monster ex-boss starts showing up, keeping the unwanted connection going. When the pesky trusted assistant turns up murdered, Judy learns there’s a connection with the shooting death of the employee. She starts sleuthing at the crime scene and stumbles upon an important piece of evidence. Can she solve all of the murders with this single find? If she does, will she finally be freed from the demons of her past? Or are things not as they seem?

Linda Thorne began pursuing her true passion, writing, in 2005. Since then, she has published numerous short stories in the genres of mystery, thriller, and romance. Her debut novel, Just Another Termination, is the first in a planned series of mysteries that tell the story of Judy Kenagy, the first career human resources manager to turn sleuth. Just Another Termination was released by Black Opal Books last month. She is currently writing the second book in her series, A Promotion to Die For.
Like her lead character, Thorne is a career human resources manager. She has worked in the HR profession in Arizona, Colorado, Mississippi, California, and now, Tennessee. She holds a BS degree in business from Arizona State University and has completed a number of graduate-level courses in her field.

Here's her book cover! Click on the link below to check it out (and buy it) on Amazon. 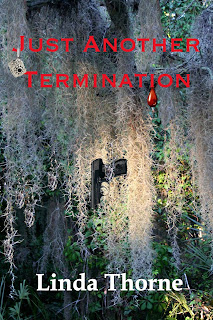