A May Yard Update

Things are moving along. We had more peonies that I’ve ever seen in one place. The iris came out at the same time. 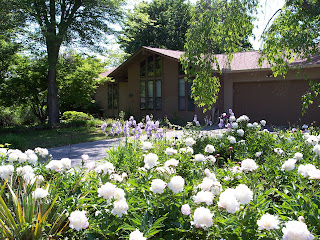 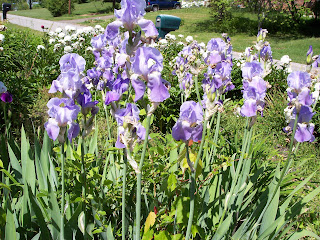 Our little tree revealed itself as a peach tree! I haven’t treated the fruit, so I doubt we’ll eat any of these, but next year, for sure. 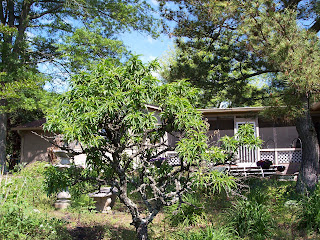 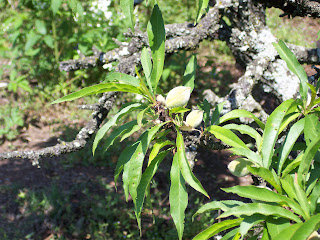 After the fierce rain beat the white peonies to death, some pink ones came out. Not as many, but gorgeous. 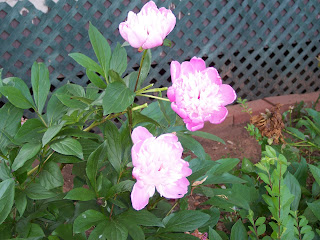 And roses! I’ve killed all the roses I ever had, so send good thoughts for these. 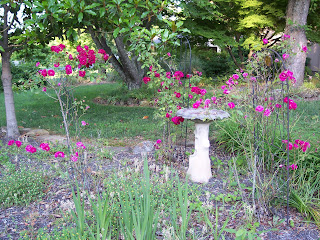 We got mulch laid in the back flower bed and it’s ready for some potted plants, I think. Next from the yard will be day lilies, just getting started now. I shot these last pictures a little too late in the day, I think. But I can't wait until tomorrow. My Wednesday blog would be late. 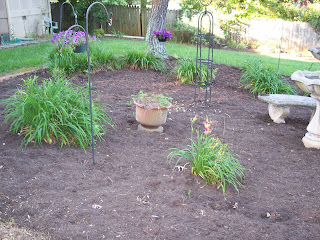 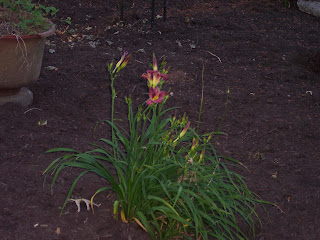 All  photographs by Kaye George

(First a little boost for a review I received yesterday: http://www.examiner.com/article/kaye-george-orchestrates-a-great-mystery-eine-kleine-murder)

Now, onto my topic~~

Last week was the anniversary of a day when my efforts of ten-plus years paid off. On Monday, the 14th of May, 2012, I talked to Kim Lionetti on the phone for nearly two hours. At the end of the conversation, I had agreed for her to be my agent!

In the year since then, a lot has happened. She set me to work on a project that she and her partner, Jessica Faust, had come up with. I hadn’t even finished it, though, when a chance for a work for hire cozy came to her from Berkley Prime Crime. It was a mystery set in Minneapolis, featuring an overweight cat name Quincy, and his mistress, Chase Oliver, the co-owner of a dessert bar shop. (A work for hire is written to the publisher’s idea, and the publisher will own the copyrights--but I’ll get paid normal royalties, etc.)

This was right up my alley for a couple of reasons. (1) I am a long-time cat owner and my most recent cat, Agamemnon, was a clever rascal, also slightly overweight. I would model the cat after him, although I’d change his coloring. I thought an orange tabby would look better on the cover than a black shorthair with extra long fangs. My cat had been a rescued feral and I swear he was reverting to saber-tooth tiger. You could see his fangs when his mouth was closed! He could be very sweet, but was exasperatingly smart. On several occasions, I saw him climb onto something next to a closed door and attempt to turn the knob. If he’d had a thumb, he could have done it.

(2) I once lived in the Minneapolis area for a little over 3 years. I’ll admit, it is my favorite place I’ve ever lived, and I’ve lived in a lot of places. My puzzlement was--how to set a cozy in the place where the darkest noir crime novels take place. Should I put it in Minnetonka, where we used to live? Hopkins, the next-door suburb, a bit closer to the Twin Cities themselves? My husband came up with a place he remembered from our stay there: Dinktytown. The name was perfect, but would it do?

I googled it extensively, a cute little area of just a few square blocks on the edge of the U of M campus, nestled between the campus and the Mississippi River. It’s on the east side of the river, where St. Paul lies, but this portion is technically Minneapolis--I checked. I got in contact with the president of the Dinktytown Business Association and he was supportive and kind, even sent me an excellent map of the area done cartoon style, highlighting the local businesses.

The upshot of all this is that I got a workable outline put together, wrote the first three chapters, and sent them off. I was in shock after I landed my awesome agent, but even more shocked when my proposal was accepted!

I got to meet Kim at Malice Domestic this year and she’s just as awesome in person as by email and phone. I can’t believe what a whirlwind this last year has been. (Plus we moved twice--yikes!)

This news has all been announced previously, but, for this anniversary, I thought I’d give some details on the background. I’m now about 3/4 (or maybe a little more) finished with the first draft of the as-yet-untitled first in the three-book FAT CAT series. It’s going well and I love the characters, especially that rascal, Quincy! (Look for the book sometime around the fall of 2014.)

Photo from Dreamstime
Posted by Kaye George at 4:00 AM 4 comments:

What a fun time I had! I got to meet new people and connect with ones I already know, mostly from Malice in previous years.

The Malice Go Round was worthwhile, but soooo tiring! Picture by Greg Puhl.

The Guppy Steering Committee met (in the bar, of course). 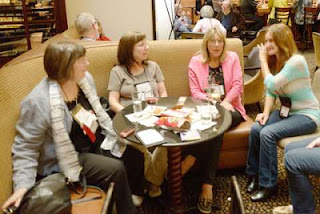 That’s me, Karen Duxbury, Elaine Douts, and Teresa Inge. Jim Jackson was also there, but behind the camera for this shot.

Here’s a shot of him from Teresa: Teresa, Maria Hudgins, Shari Randall, Jim Jackson, Jan (with Jim). and me 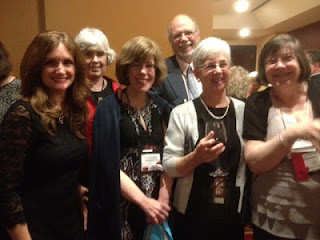 Here’s a picture of me, Tracy (don’t have her last name), Larissa Reinhart, and Diane Vallere. 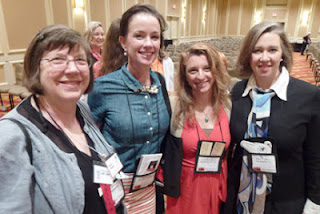 My panel early on Sunday was well-attended and went smoothly. Larissa (on the right) is from the same area where I grew up and where EINE KLEINE MURDER (the book debuting at his conference) is set. Karen MacInerney (next to Larissa) was in the first face-to-face critique group I joined in Austin. And Peter Lovesey was just fun to sit next to, listening to his British accent. C. Ellet Logan (on the left) ran the panel with aplomb. (Picture from Larissa’s friend) 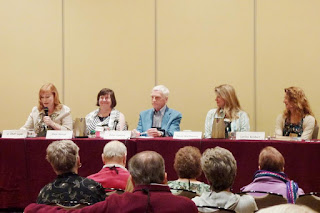 At my signing, Harlen Cobin was wandering around and Daryl Gerber jumped up to talk to him, then got her picture with him. So, I did too. 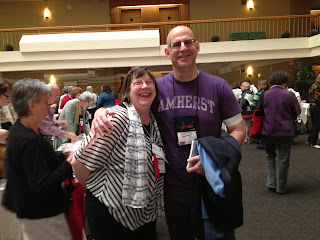 After Malice, Sherry and her husband zipped me to Baltimore for a signing at Kim Gray’s Gift Cellar which she kindly donated for a signing by Sheila Connolly, James M. Jackson, me, Edith Maxwell, Kimberley Lynne, and Barb Ross. 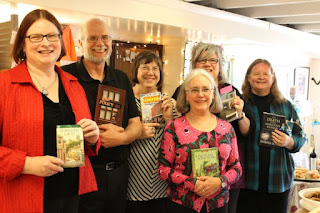 I'm probably the last Malice attendee to post pictures, but here they are!
Posted by Kaye George at 4:00 AM 7 comments:

Every book I write is dear to me in some way. They’re my children and I love them all. DEATH IN THE TIME OF ICE is no exception. I’ve just learned that it will be released in June, but don’t have an exact date yet.

If you haven’t seen the cover on Facebook yet, here it is! It’s also on my Neanderthal page at the tab above. 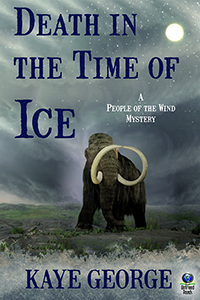 If you’re wondering what this book is about, I’ll first give you the teaser: Enga Dancing Flower knows her tribe is in trouble. The dark seasons are becoming longer and the mammoth herds are fleeing south. When the tribal leader is found stabbed to death, the new leader thinks Enga did it. Expulsion and certain death looms. Enga must find the murderer to save her tribe -- and herself.

The book opens in the fall (which, of course, is not what Enga’s tribe calls it). The cold season approaches and the leader, Hama, a wise old woman, beseeches Dakadaga, the Spirit of Mother Sky, to give the tribe her blessing. The wind blows cold and stirs sparks from the fire. Hungry bellies growl audibly. Something must change, and these are a people who do not change rapidly or without great cause. Their way of life has continued, mostly unchanged, for 200,000 years.

Here’s a bit about the background and a tiny smidgen of my research: http://kayegeorge.com/research.html

I’m so excited about the birth of this book! I hope it’s not too awfully long before I get the sequel done!
Posted by Kaye George at 4:00 AM 2 comments: