The Imogene Duckworthy Mysteries, listed in order below. All are available in e-book, paperback, and audio formats.

CHOKE: Twenty-two-year-old Imogene Duckworthy has been waiting tables at Huey's Hash in tiny Saltlick, TX, itching to jump out of her rut and become a detective. When Uncle Huey is found murdered in his own diner, a half-frozen package of mesquite-smoked sausage stuffed down his throat, Immy, an unwed mother who has always longed to be a PI, gets her chance to solve a real crime. 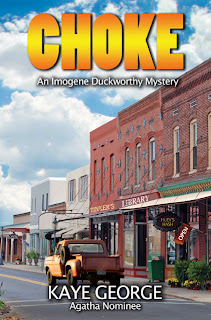 SMOKE: Imogene Duckworthy, who yearns to be a PI, has landed a job assisting Mike Mallett in Wymee Falls, Texas. Bringing home a pot-bellied pig as a birthday gift for her daughter, Nancy Drew Duckworthy, Immy discovers the body of the owner of Jerry's Jerky hanging in the smokeroom. Now she has her chance to prove her skills. 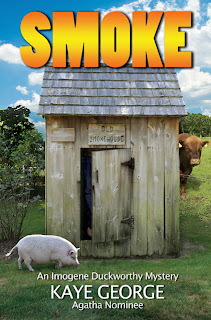 BROKE: Imogene Duckworthy, able PI assistant, wants to be on her own. She finds a rental house where her four-year-old daughter, Nancy Drew Duckworthy, and Drew's pet pig, Marshmallow, are allowed. The rumors are that the house is haunted. It's no rumor there's a dead man in the bathtub when she inspects the house, though. 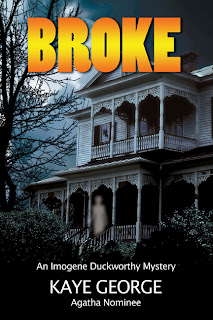 Purchasing links for paperbacks and e-books in all formats can be found at http://kayegeorge.com/novels.html

New comments are not allowed.