I'd like to welcome Jim to my Travels again today. He was one of my first Guppy critiquers and, years later, followed me to become the president of that incredibly helpful group. Here he talks about using location in fiction.

First, here's a bit about him and his successful mystery series:

James M. Jackson authors the Seamus McCree mystery series. ANT FARM, BAD POLICY, CABIN FEVER, and DOUBTFUL RELATIONS (8/23/16). Jim splits his time between the deep woods of Michigan’s Upper Peninsula and the open spaces of Georgia’s Lowcountry. He is the current president of the 600+ member Guppy Chapter of Sisters in Crime. You can find information about Jim and his books at http://jamesmjackson.com.

One of the great divides in the writing community occurs in choosing locations for their stories. Some prefer the freedom of creating their own communities where every street, every business, every stop sign is there because they created it. Some of them do such a great job that I want to visit, if only I could. Those authors are concerned with consistency. Even if they don’t remember there is a left-turn-only lane going from Broad to Main, their readers will, and if it disappears in a later book, the author will hear about it.

Other authors prefer to set their stories in real places, with perhaps a few modifications so bodies don’t turn up in real businesses. Many readers get a charge when they’ve been to a location used in the book. It shares a communal bond between them, the author, and the characters. But woe to the author who has the sun directly in the eyes of a character driving on what locals know is a north-south street. A hot email is about to arrive. 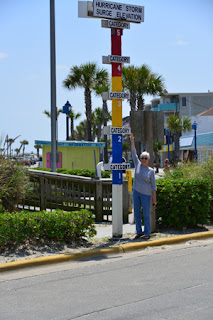 Some authors blend the two. Louise Penny comes to mind as one who created the village of Three Pines that so many want to visit but also uses actual places in cities like Quebec. As an aside, I visited Quebec City this summer with one of our granddaughters, and she chose to tour the Morrin Centre. I walked in having totally forgotten about its role in Penny’s Bury Your Dead and was transported back to the story. That’s the power of real locations. 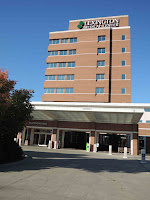 The Seamus McCree novels use (mostly) real locations and for Doubtful Relations I decided to have Seamus and his mother take a road trip. Some people are happy to research settings using the internet. I prefer visiting the places I use. When you read about Seamus’s home in Cincinnati, or the hotel he stays in Columbia, SC, or Tybee Island near Savannah, or North Carolina’s Outer Bank, or the hills and train stations of New Jersey, (all of which are in Doubtful Relations), I’ve been there, quite possibly with my camera to keep my memory accurate.

Personal visits do not solve all problems. For example, a beta reader sent me an urgent note that a Cincinnati restaurant I used for a scene no longer exists—in fact the building has been torn down. I actually knew that, and fortunately Doubtful Relations is set a few years in the past, when the restaurant did exist.

So readers, what about you? Do you prefer real locations or a well-crafted fictional locale? And how do you respond when you find a factual error in a novel? 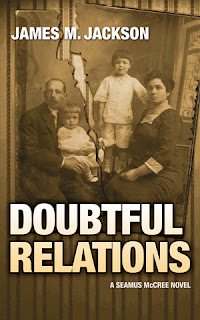 Financial crimes investigator Seamus McCree has wife problems, and Lizzie’s not even his wife anymore. Her current husband disappeared while traveling, and Lizzie turns to Seamus for help.

Equal parts road trip, who done what, and domestic thriller, Doubtful Relations takes psychological suspense to a new level. Seamus McCree fans and newcomers alike will delight in this fast-paced novel that leaves no one in the family unchanged and keeps you guessing until the very end.
Posted by Kaye George at 1:00 AM