A Trip with James Jackson to Greenland!

I've known Jim for many years through our writing, the Guppies, and even meeting in person. He's a good friend and a wonderful writer! Here's his bio:

James M. Jackson authors the Seamus McCree series. Full of mystery and suspense, these domestic thrillers explore financial crimes, family relationships, and what happens when they mix. August 2022 saw publication of the 7th novel in the series, Granite Oath. (Click here for information and purchase links.)

Jim splits his time between the wilds of Michigan’s Upper Peninsula and the city life in Madison, WI. You can find more information about Jim and his books at https://jamesmjackson.com or contact him via email.

And now, what you're waiting for, a trip to Greenland, starting with a view of their tourboat cruising past a glacier! 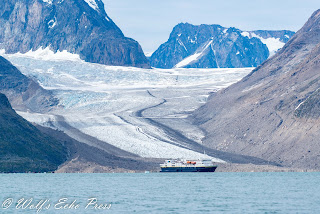 A few facts to put Greenland into perspective with wherever you live. Its total area is about 150% of Alaska’s (220% of Texas), but an ice sheet covers 80% of it, forcing the population to its seaside edges. The ice sheet at its thickest is over 12,000 feet. The massive weight has compressed the land underneath to below sea level. Most people live in the south and west. The total population is 56,500, of whom 14,800 live in the capital, Nuuk. Eric the Red named the island Greenland to lure settlers from Iceland!

Fjords carve Greenland’s coastline. Glaciers head many of the fjords, but they are retreating. Many glaciers now “hang,” meaning they no longer reach the ocean. We had many memorable experiences, and at the top of the list was meeting a pod of feeding Humpback Whales.

We rode small boats to explore the Illulissat Icefjord, where the Greenland icecap calves enormous icebergs into Disko Bay. I spotted the first Humpback in a cove created by icebergs. The boat idled in, and we discovered eight together. Humpbacks are 45-50 feet long (which is huge, but only half the size of the blue whales we saw earlier off the coast of Iceland). They can live up to 50 years.

In the pictures below you can see three feeding together, a dripping tail just before the whale dove and the underside of another’s fluke. I sent that picture to HappyWhale.com, and they identified that individual as HW-MN0102358, which was first recorded on July 31, 2018 in the same general area (and spotted again by someone else a few days after my encounter). Humpbacks have two nostrils. The spout you see is water vaporized when they exhale. 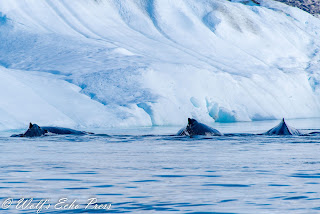 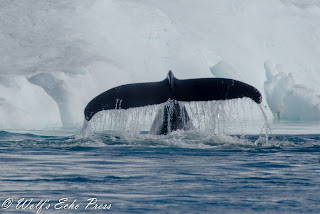 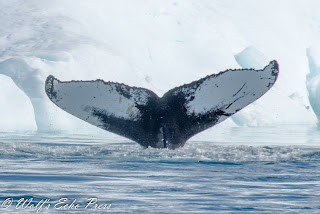 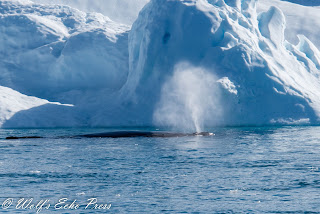 We enjoyed their company for twenty minutes. When one swam underneath our boat, turned around, and swam underneath again before surfacing, we wondered who was entertaining whom. Our time was up, but as we were leaving, two other boats arrived to witness the magic.

Kaye and others have asked if they can expect to find my fictional sleuth, Seamus McCree, on a cruise. Never say never, but it’s unlikely. Seamus doesn’t have to travel to find trouble, and he’s turning into a homebody. Given his preference (and I usually listen to him), he’ll remain at his place in Michigan’s Upper Peninsula (where the most recent Seamus McCree novel, Granite Oath, takes place.)