I'm so delighted to welcome Lorie Lewis Ham to my blog today, and so excited about her new book. Lorie, in her role as editor of Kings River Life Magazine and the new Mystery Rat's Maze Podcast had been a valueable friend to many writers over the last several years, and one of them is me. Here's my chance to pay her back. Here's her essay on her new novel--be sure to check this out!

GIVEAWAY! LORIE WILL GIVE AN E-BOOK AWAY TO ONE PERSON WHO COMMENTS, LEAVING AN EMAIL ADDRESS (which can be disguised, kayegeorge at gmail dot com, or somesuch.). She will pick the winner before next Wednesday. Good luck!

“One of Us” is available on Amazon, on the Nook at Barnes and Noble, and Kobo.

ook Settings-Why I Set My Book in the Tower 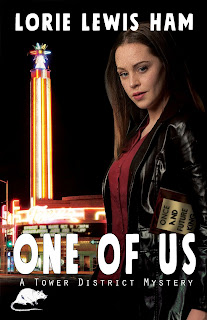 My first mystery came out in the early 2000s and featured a gospel singing sleuth. I set that series in a fictional version of my hometown of , largely because it was what I knew. The last book in that series came out 11 years ago.

As I started working on a new book I knew that I wanted to do something different so I decided to set my new book, which is the first in a new series, in a place that is very dear to me, the Tower District in .

The historic Tower District is 's dining, arts, and entertainment hub. People might be surprised to know this, but a great deal of community and regional theatre happens in the and much of it happens in the Tower. My main character, Roxi Carlucci, actually helps out with a theatre production in this book and that is where the murder takes place. The Tower is also the home of the Rogue Festival, a fringe festival where performers from all over the world come to perform (this festival will be featured in a future book). You will also find unique shops, restaurants, clubs, coffee shops, tea shops, and much more.

“As we walked to the heart of the Tower and its many shops and restaurants, I felt like I'd gone back in time. I had read in an article that most of the houses had been built between the 1920s and the 1950s. There wasn't a new house in sight—each home had the kind of character only houses built before the 1960s seemed to have. The streets were lined with various kinds of tall trees. Even the sidewalks had a bit of character with its cracks and unevenness here and there.”

I love the Tower District, it is my favorite place in the area to hang out, so I hope you will all take a journey with me to the Tower District in my new mystery novel, and I hope some of you will come check it out in person as well. Keep in mind that my version is somewhat fictionalized—adding businesses that were needed for the sake of the story and changing some of the names—but it is still just as wonderful!

One of the locations mentioned in “One of Us” (it is also on the cover of the book), is the Tower Theatre. Its very existence and the Tower District way of life is currently at risk. If you would like to know more you can find information on the Facebook page for “Save the Tower Theatre.”

“One of Us” is available on Amazon, on the Nook at Barnes and Noble, and Kobo.

“One of Us”  A Tower District Mystery by Lorie Lewis Ham-

A woman starting over. A gossip website. A handsome playwright with a dark side. A director with an explosive temper. And a murder without a motive. It’s a mystery set in the historic Tower District—'s dining, arts, and entertainment hub.

Bio- Lorie Lewis Ham lives in and has been writing ever since she was a child. Her first song and poem were published when she was 13, and she has gone on to publish many articles, short stories, and poems throughout the years, as well as write for a local newspaper, and publish 6 mystery novels. For the past 11 years, Lorie has been the editor-in-chief and publisher of Kings River Life Magazine, and she produces Mysteryrat’s Maze Podcast where you can now hear an excerpt of her new book One of Us. You can learn more about Lorie and the new book on her website mysteryrat.com and find her on Twitter @mysteryrat and Facebook. Another way to keep up with Lorie’s writing is to subscribe to her newsletter, which you can do on her website.

Lorie has been married to Larry for 30 years and they have 2 grown children—Jayce and Joseph Ham. She currently has 5 cats (Merlin, Sam, Dean, , and ), 4 dogs (Lestat, Huey, Xander, and Phoebe), and a pet dwarf rabbit (Sherlock). For many years, she worked in pet rat rescue, and has had many pet rats of her own over the years.