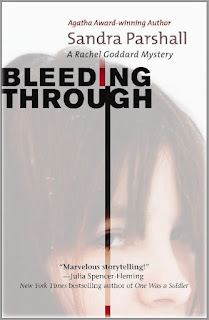 Today I'm welcoming Sandra Parshall to my place. She has been a role model for me ever since I got serious about mystery writing. Her series sleuth is Rachel Goddard, a veterinarian in . Parshall's love for animals is no secret and she champions their cause whenever she can. She's the reason I wasted--I mean spent --so many hours on the National Zoo Panda Cam when Tai Shan was a baby.

Her first mystery, THE HEAT OF THE MOON (which absolutely blew me away), develops Rachel's memories of her past and established her as a heroine to be admired. In the second, DISTURBING THE DEAD, Rachel leaves the DC area and ventures far into , where she will remain and practice. This book introduced me to Melungeons. In BROKEN PLACES, a past love of Rachel's beau turns up, along with a dead body, of course. UNDER THE DOG STAR, has, as one of its themes, a feral dog pack. These summaries are overly simplified and don't do the books any sort of justice. If you haven't discovered Parshall, I recommend remedying that quickly and delving into her work. Her books are available in print, ebook, and audio. She has a brand new mystery coming out in this month, called BLEEDING THROUGH. I can't wait to read it! 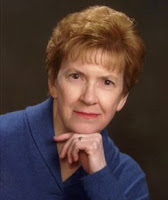 BIO: Sandra Parshall’s first paying job as a writer was that of obituary columnist for her hometown newspaper in . Within a few months she moved up to writing feature stories. She worked on newspapers in and on the Baltimore Evening Sun before moving to the , area with her journalist husband. They still live there, with their two cats, Emma and Gabriel. is a former member of the Sisters in Crime national board and remains active in SinC as manager of the members-only listserve.

ME: , have you ever worked for a vet? If not, why make your main character one? Wasn't that harder than choosing a profession you know?

: No, I’ve never worked for a vet, but I’ve certainly spent plenty of time (and money) in vet clinics over the years with our pets. I wanted Rachel to have a job that would show her as the warm, caring person she is. I also wanted it to be a profession that her mother, Judith, would disapprove of. I knew Judith would be a psychologist because that would work best in the kind of suspense novel I wanted THE HEAT OF THE MOON to be. Rachel’s sister Michelle followed in Judith’s footsteps and became a psychologist, but despite Judith’s insistence that Rachel go to medical school and become a physician, she held onto her dream and became a veterinarian. Judith never let her forget that she was wasting her ability by doctoring cats and dogs. So the choice of Rachel’s profession initially highlighted the mother-daughter conflict, but as the series has continued her job has often been important in the stories.

ME: I've learned so much about writing from reading your prose. For instance, I remember remarking, awhile ago, about how you know just when to begin and end scenes. Your dialog is natural, your settings are alive. And you tackle serious issues in your books. How did you learn to write so well?

: That’s enormously flattering. Thank you! I learned to write by reading voraciously and writing many, many short stories and, later, several novels that never sold. I didn’t fully grasp story structure until I started reading and writing suspense/mystery. A crime that has to be solved gives a book a narrative drive that keeps me on track. Every element must contribute to the central story. I can’t let myself indulge in long tangents that don’t move the plot forward or poetic descriptions that don’t develop the mood and tone. I need those constraints. I love writing in this genre.

ME: You are one of my mentors, with your rich, literary writing. I'm never disappointed when I delve into one of your complex, satisfying books. Can you name some of your mentors?

: The two mystery/suspense writers I idolize are Ruth Rendell and Thomas H. Cook. Rendell’s ability to get inside the heads of her characters is always amazing to me. There is no type of character she can’t write convincingly. Personally, I think she’s telepathic. Nothing else can explain how this genteel English lady in her early eighties knows so much about the thoughts and emotions of such a broad range of people from every level of society. Her plotting is impeccable, and she can invest the most ordinary objects and places with a terrifying menace. Tom Cook’s writing is beautiful, and his deep insight into his characters is extraordinary. I also love Karin Slaughter, Tess Gerritsen, Linwood Barclay, and a number of others who excel at creating suspense.

ME: You're an expert at coming up with evocative titles. How do you do this?

: Usually the book will tell me its name if I’m patient. For example, my working title for THE HEAT OF THE MOON was MEMORY, because that’s basically what the story is about. I was well into it, writing chapter eleven, when I typed: “Her [Mother’s] show of affection for me was like the heat of the moon, an illusion, a glow that gave no warmth.” And I realized that was the title I’d been waiting for.

ME: How long did you write before you were published? Do you have unpublished books sitting around and, if so, do you ever plan to rework and publish them?

: I’ve been writing since I was a child, trying to sell since my twenties, so it took me decades to get published. I had almost given up hope of ever being published when Poisoned Pen Press took THE HEAT OF THE MOON. I have a habit of cannibalizing old manuscripts and reusing characters I love, settings I like – if I loved it when I first wrote it, I’ll find a way to rework it and give it new life in a new book. Rachel’s young friend Holly Turner was recycled. She existed before Rachel did, in an old manuscript I wrote years and years ago. I don’t have much that I could rework and publish now, but it has all been useful and will continue to be, I’m sure.

ME: Do you have plans to write books outside your series? (Not that I don't want waaay more Rachel books!)

: I would like to write more psychological suspense like THE HEAT OF THE MOON. To return to your previous question, I do have one suspense novel that I want to rewrite and try to sell. I’ve been careful not to steal a lot from it for other books. I don’t want to pick its bones clean and have nothing to rework.

ME: You've been putting out about a book a year. Are you comfortable with this pace? How do you manage your writing time? Are you disciplined about it?

: I’m not totally comfortable with it. It’s a strain, mainly because I’m not terribly good at managing my time or concentrating in the midst of distractions. If my writing time is interrupted, it tends to vanish. It’s hard for me to get my concentration back. I was just reading about Patricia Cornwell’s habit of retreating to a hotel room and writing every waking moment, with no distractions. I wish I could do that. But I would miss the cats!

ME: I know that writers involved in traditional publishing are frequently finished with the next and writing the one beyond that when a book comes out. How many do you have lined up? Can you tell us a bit about them?

: I wish I could say the next one is finished, but I feel as if it’s barely begun. (I’ll probably still feel that way when I turn it in. I can always see a million more things that need to be done.) I’m writing book number six in the Rachel series. On the surface, the story appears to be about a controversy over development of a high-end mountain resort in rural , – development that will bring in a lot of jobs while radically changing the nature of the community. And the jobs are the Walmart variety – not all that great. The dispute between pro and con is vicious, and people start turning up dead. Of course, this being one of my stories, there’s a whole lot more to the murders than a simple dispute over development.

ME: Anything else you'd like my readers to know?

: I’d like to add that my new book, BLEEDING THROUGH, was written for the readers who have relentlessly pushed me for six years to revisit the events of THE HEAT OF THE MOON and resolve some of the unfinished business in Rachel’s life and in her relationship with her sister. Michelle plays a major role in the book – the first time she’s appeared since THE HEAT OF THE MOON. The plot has a murder for Tom Bridger to solve, but Rachel and Michelle’s past – bleeding through into the present -- is a strong thread in the story. I can’t promise that I’ve given readers exactly the resolution they want, but I think I’ve handled it in a way that is true to Rachel.

Thanks for being here today, Sandy, and best of luck with the new book!
Posted by Kaye George at 4:00 AM