Peg is here today with a very different kind of interview. What is below is just part of the whole. The interviewee is kinda different, too. Read on for details and for a chance at several prizes! 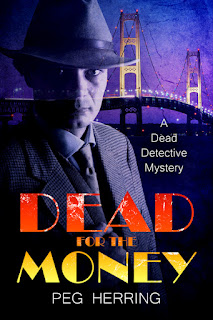 Thanks for letting me travel along, Kaye!

Introduction: Peg Herring’s Blog Tour for May (and one post in June) consists of a mix of interviews with Seamus, the Dead Detective, with posts on writing. Yesterday’s post was at The Stiletto Gang,  The next post will be at Melissa’s Imaginarium on May 7th.  A complete schedule is posted at Peg’s blog, It’s A Mystery to Me.

When the tour is over (June 11th), the complete Seamus interview will be posted on Peg’s blog.

Prizes: People who comment on any blog post on the tour will be entered in drawings for several prizes: Dead Detective T-shirts, copies of THE DEAD DETECTIVE AGENCY and DEAD FOR THE MONEY (paperback or e-books available), and the chance to be a character in the third of the series DEAD FOR THE SHOW. Multiple winners will be drawn.

A Dead Guy Talks about You
Interviewer: We’re here again with Cross-back Detective Seamus, who investigates suspicious deaths for the dead by coming back to earth and inhabiting the bodies of living humans. Thanks for joining us again, Seamus.

Seamus: Part of the job, they tell me.

Interviewer: We were talking about what it’s like to be inside someone’s head. Can you elaborate a little on that?

Seamus: Well, I don’t think many people know that their general outlook on life has an effect on how they see things.

Interviewer: What do you mean?

Seamus: If a person is depressed or if he tends to be a negative type, what I see through his eyes is gray and kinda faded-looking. If I jump to someone more positive, everything brightens up, like the lights came on or the sun came out.

Interviewer: So mood affects everything?

Seamus: Yeah. It’s just that a person can’t see his own mood. A guy might know one day that things seem better than they did the day before, but he doesn’t notice it most of the time. We talk about brighter days and a lighter step, but most people don’t realize they’re not just figures of speech.

Interviewer: Does that apply to everything a person experiences?

Seamus: It does. Speech, for example. Now, it’s awful to listen to any of you, but—

Interviewer: What do you mean, awful?

Seamus: To us, you people sound like records played too slow on a phonograph, like a 78 played at 33 1/3, you know?

Interviewer: (with a nervous laugh) I’m afraid I don’t. What do those numbers mean? And what’s a phonograph?

Seamus: Never mind. I just meant the sound drags out.

Interviewer: So our speech seems slow to you.

Seamus: And there’s interference, too. Things you guys ignore, like the refrigerator running or the traffic passing outside, we hear. Your brain learned a long time ago to filter all that out.

Interviewer: But once you’re left earth, you have to relearn it.

Seamus: (Chuckles) I once hosted with a guy who’d just got hearing aids, and his experience came close to what we get, all those noises at the same volume as whatever you’re trying to listen to. It takes a while each time to kinda fine tune things.

Seamus: You get used to it, or you don’t cross back again.

Interviewer: You’re saying a cross-back must do whatever it takes to get the job done.

Seamus: The good ones do. We don’t have to do the job at all. It’s always up to us.