I'm down to the wire to get my Agatha-eligible stories presented here in December, since one just got published last week--a good problem to have!

So I'll give you a bit of the new one, HENRY, GINA, AND THE GINGERBREAD HOUSE, which appears in its entirety in GRIMM TALES from Untreed Reads. It's an e-book of stories based on fairy tales, a fun project! 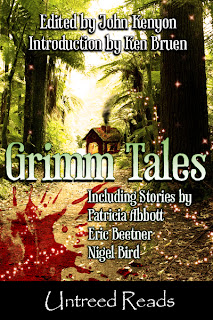 At the end of this excerpt, I'll give you the whole story, DRIVING OUT OF DUMAS, since it's very short and is available free at Apollo's Lyre.

Be sure and come back here Friday when the editor of GRIMM TALES, John Kenyon, will be my guest.

Here's the excerpt first (it won't be hard to tell what fairy tale this is based on):