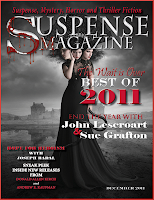 Here's my review, for "Suspense Magazine" in October, of this excellent thriller. I should mention that you can always get 4 free trial copies if you're thinking of subscribing. Just click on the link above and read the copy below the cover image.

“Threat Warning” by John Gilstrap:
There’s no need to wonder how Gilstrap gets the rave reviews and best-selling status that he gets. Just start reading and it all becomes clear.
A bizarre group calling themselves “The Army of God,” and calling each other Brother-This and Sister-That, have a secret goal so lofty it’s worth killing for. At least in their minds it is. The story opens with young Colleen Devlin preparing to mow down motorists on the over the during the afternoon rush hour. She’s at one end of the bridge and Brother Stephen is at the other end.
Jonathan Grave is driving across the bridge at the moment they open fire, stuck in traffic, chatting with his friend and passenger, Father Dom D’Angelo. Jonathan instantly recognizes the sound of an automatic weapon, creeps out of his car, and whips out his Colt .45. Although he hits the shooter in the chest, she runs away just as he realizes she’s a female and not a young man. A misguided Secret Service agent gets the drop on Jonathan, thinking he’s the perpetrator, and both shooters escape detection.
Colleen commandeers a minivan for her getaway and, in the process, takes the driver and her teenage son hostage to a mountain hideout. The Army of God is well-organized and supremely motivated, but their captives, the wife, and son of a deployed Delta force operative, and their opponent, Jonathan Grave himself, are formidable. Grave and his team watch as other fatal mass attacks are carried out across . They struggle to get to the people behind the carnage that continues splashing blood and leaving bodies across the country before even greater havoc ensues.
Hang on, it’s a wild ride!
Reviewed by Kaye George, Author of “Choke” for Suspense Magazine
Posted by Kaye George at 10:37 PM