Guest Judy Alter asks: Should I write a sequel?

I'm delighted to have the illustrious, award-winning author, Judy Alter, as my guest today. I loved Saving Irene and know I'll vote on her dilemma. This book reads, in part, like a love story to Chicago, a place where I once lived and miss just as much as she obviously does.

Here's part of her impressive bio:

I am a past president of Western Writers of America and have been inducted into their Literary Hall of Fame. I have had awards from the National Cowboy Museum and Hall of Fame, the Texas Institute of Letters, and Western Writers of America, Inc., including their Owen Wister Award for Lifetime Achievement, and I was inducted into the Hall of Fame in June 2015. I belong to Sisters in Crime, the Guppies subgroup of Sisters in Crime, and the Texas Institute of Letters and I am a member of Women Writing the West. The Fort Worth Public Library elected me to their Texas Literary Hall of Fame.


And now, her discussion on the sequel! 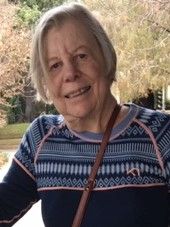 My newest mystery, Saving Irene, began as an impulse. I have no idea where the idea of a Chicago TV chef came from, but one day I saw the opening scene so clearly in my mind that I sat down and wrote. Being a pantser, I just kept on writing and some twenty thousand words later, there they were: Henny (Henrietta) James, the chef’s assistant who tells the story; Irene Foxglove, the faux French chef with pretensions; and Patrick, the gay guy next door. Fictional characters with lives of their own.

Long before I wrote mysteries, I had developed a career writing about women in the American West. So, when contracts for two unrelated projects, set in Texas, came along, I left Henny, Irene, and Patrick in limbo for almost two years. But when COVID-19 and quarantine hit us, the publisher of my western works went on hiatus, leaving one manuscript and one proposal stranded on her desk and me with no viable project. I pulled out Irene’s story, read it again, and thought, “Hey, this isn’t bad. I like the voice.” I began writing, and the story seemed to flow more easily than any other mystery I’ve written (this is number fifteen). Long story short, I wrote from March to June and spent the summer on publishing details—editing, proofing, formatting, etc. Saving Irene launched on September 16.

All along I intended it as a stand-alone. I was going to get back to those unfinished western projects. But the editor, though back at work, hasn’t gotten to my part of the backlog on her desk, and I began to get nice comments about Irene’s story from readers. One wrote: “This reads like a stand-alone novel, but there's certainly room for a sequel (hint, hint) should the author be so inclined. Meanwhile, I'll be checking out [Alter’s] earlier titles.” Another, “I hope there will be more books about Henny and Patrick as her career and love life move on.” Still more: “This book is Judy Alter at her best: a fast-moving pace; fascinating new characters in what one could only hope will become a series.” And, finally, “I have read all of Judy's … mysteries and this is the best one by far! I love Henny and Patrick! I hope there is a sequel to it!”

So there’s my dilemma. In a way, it boils down to Texas vs. Chicago. I have written about Texas all my long career, and I am deeply invested in the state’s history. But I grew up in Chicago’s historic Hyde Park neighborhood and writing about it was like visiting with an old friend, a nostalgia trip. Perhaps age calls us all back to the scenes of our childhood, but I loved sending Henny to the church I grew up in or on a picnic to Promontory Point where I spent so many happy weekends.

In truth, I’ll probably try to do it all. Yes, I have ideas for Irene in Danger rattling around in my head, but I put a lot of time and work into the other manuscript, which is under contract, so sooner or later I’ll have to deal with it. And the proposal I submitted combines food and history in a nonfiction but very Texan approach.

Hint: I am really proud of the cover of Saving Irene. I found free images of a chef and the background of Chicago-style buildings and gave them to a designer with the request that she age the chef, which she did. Strangely enough, one interviewer thought the chef looks like me (we’ve never met, so she’s only seen pictures) and a reader who knew my mom thought that was who was the model. Neither is true. But I can already envision the cover of Irene in Danger, a sign to me that the sequel was meant to be. I’m just having trouble with that opening scene. 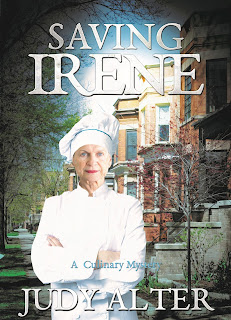 I’m curious how other authors handle this. Do you deliberately write the a book as the first of a series or do you decide later it could be? Is it a flexible decision?
Posted by Kaye George at 12:00 AM