Guest Judy Penz Sheluk with news about an upcoming relase!

I'm excited to welcome Judy to my travels today with news about a new book, available now for preorder!
Traveling on the T.S.S. Canberra Greek Line 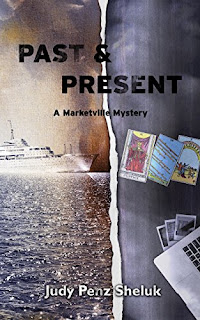 by Judy Penz Sheluk
Okay, I’ll admit it, the title of this blog post is a bit misleading, since I’ve never personally traveled on the T.S.S. Canberra, and in fact, the ship only sailed for the Greek Line from 1948 to 1956. But my mother, Anneliese, emigrated from England to Canada on that ship in July 1952, ready to start a new life in Toronto with her fiancé, Anton (Toni) Penz. Both had moved to England soon after the war ended (my father from Apatin, Yugoslavia, now Serbia, my mother from Stettin, German, now Szczecin, Poland).

Now here’s the thing: while I knew my parents had met shortly before my father was set to immigrate, I never knew what ship either one of them had come over on. They just didn’t talk about their lives before coming to Canada, and I suppose I didn’t ask. When my father passed away from stomach cancer in 1970, any stories he had died with him. As for my mom, she still wasn’t talking. 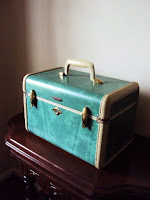 On September 21, 2016, my mom died after a lengthy battle with COPD. And there, at the back of her closet, was a blue and cream leather train case, the sort of case you’d have traveled with in the 1950s. Inside there were, among other things, immigration papers, death certificates for her mother, my father, as well as a document from the T.S.S. Canberra; she’d embarked at Southampton and disembarked in Quebec City, Quebec, where she took a train to Toronto.

The writer in me had to learn more. I began by contacting the Canadian Museum of Immigration at Pier 21 in Halifax, Nova Scotia, as well as a good friend, a longtime collector of ocean liner memorabilia.

Bit by bit, I was able to weave a tale about a woman named Anneliese Prei who immigrated to Canada in 1952 to be with her fiancé, only to be murdered four years later. That tale morphed into Past & Present, the second book in my Marketville Mystery series, and while it’s a work of fiction, my protagonist, Callie Barnstable’s, findings and frustrations with digging through the past come directly from my own research. It seemed only fitting to dedicate the book to my mother, and to release it on September 21, 2018, the two-year anniversary of her death. Here’s a bit about it (and yes, there’s also an Anton in the book):

Sometimes the past reaches out to the present...

It’s been thirteen months since Calamity (Callie) Barnstable inherited a house in Marketville under the condition that she search for the person who murdered her mother thirty years earlier. She solves the mystery, but what next? Unemployment? Another nine-to-five job in Toronto?

Callie decides to set down roots in Marketville, take the skills and knowledge she acquired over the past year, and start her own business: Past & Present Investigations.

It’s not long before Callie and her new business partner, best friend Chantelle Marchand, get their first client: a woman who wants to find out everything she can about her grandmother, Anneliese Prei, and how she came to a “bad end” in 1956. It sounds like a perfect first assignment. Except for one thing: Anneliese’s past winds its way into Callie’s present, and not in a manner anyone—least of all Callie—could have predicted.

Past & Present is available in trade paperback everywhere, and on Kindle at the special introductory price of $2.99 (reg. $5.99). Find it: http://authl.it/afj

About the author: Judy Penz Sheluk is the author of the Glass Dolphin Mysteries (The Hanged Man’s Noose; A Hole in One) and the Marketville Mysteries (Skeletons in the Attic; Past & Present). Her short stories appear in several collections.

Judy is also a member of Sisters in Crime International/Guppies/Toronto, International Thriller Writers, Inc., the South Simcoe Arts Council, the Short Mystery Fiction Society, and Crime Writers of Canada, where she serves on the Board of Directors, representing Toronto/Southwestern Ontario. 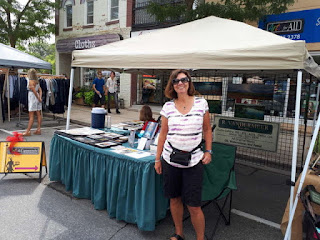 Postcards from the T.S.S. Canberra (known as the T.D. Canberra in German)

Thanks for posting with my Travels today, Judy. Good luck on sales for the new novel--it sounds very good!