My Playlist for Eine Kleine Murder 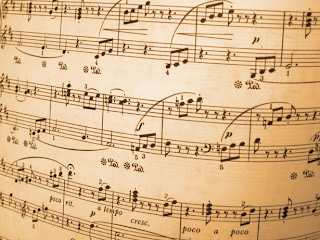 Since my new series, the Cressa Carraway Musical Mysteries, features a composer and keyboardist, you might think that music plays a large part in the book. And you’d be right! In fact, Cressa, like me, lives her life with background music. Like Cressa, Bach’s Jesu, Joy of Man’s Desiring is always looping in my head unless something else has taken over. In fact, many of the happenings in the book recall different pieces to her.

A fellow author, also published by Barking Rain Press, is Ricky Bush (http://www.barkingrainpress.org/ricky-bush/), a blues musician and fan. He put his plaulist on his blog and inspired me to create one for my novel. I had once thought it would be cool to include a CD of the pieces with the purchase of a book. That turned out to be not feasible, however. It’s true that the copyright on most classical music has run out (or was composed before the process was invented). However, the recordings of the pieces belong to the groups who have performed them, or to the labels that produced the albums. I decided it would be much simpler to merely provide links to performances.

My publisher has put my playlist at http://www.barkingrainpress.org/products/eine-kleine-murder/. If you page down, you’ll see the tab called Playlist. She’s taken the links I provided and gone one better--she’s also provided links to information about the composers. Very cool!

Below is a list I put together that links the pieces with a snippet of the text in my novel that refers to the composition. I tried to use versions that don’t include advertising at the beginning, but in a few cases I thought the performance worth the hassle of sitting through the ad, or couldn’t find another suitable one.

These are the links to online performances of all the pieces mentioned in EINE KLEINE MURDER (unless I missed one--in which case, let me know!). If you’d like to get an idea of the mood suggested by them, you can just listen to a few measures. But if you have the time, they’re all worth hearing in their entirety.

(If you’d like to sample the first 4 chapters, you can sign up to do that here:
http://www.barkingrainpress.org/products/eine-kleine-murder/.)

3 Chapter 2
Debussy’s La Mer
“As I stroked through the dark lake she had grown up with, hoping to see her soon,
the ripples of Debussy’s La Mer accompanied me in my mind.”
http://www.youtube.com/watch?v=ZoRSTRwGUSY
London Symphony Orchestra, Valery Gergiev conducting

4 Chapter 3
“Chopin’s ponderous Funeral March, the stark the stark piano version.”
http://www.youtube.com/watch?v=Hgw_RD_1_5I
Officially, this is a movement from Piano Sonata Op.35 No.2, played by Arturo Benedetti Michelangeli.
Here’s a snatch of an orchestra version, performers not given.
http://www.last.fm/music/Fr%C3%A9d%C3%A9ric+Chopin/_/Funeral+March

5 Chapter 6
“Gounod’s comic Funeral March of the Marionettes, the song Alfred Hitchcock used as the theme song of his television show.”
http://www.youtube.com/watch?v=5eIk5DWUx_E
The TV theme music starts at 45 seconds
I can’t determine who is performing this recording.

6 Chapter 8
“the sad, sweet ballad, ‘Scarborough Fair,’ set in the ancient Dorian mode, with its allusions to the medieval Black Death”
http://www.youtube.com/watch?v=Cr8v55Tet7o
Old English ballad performed by Simon and Garfunkel

7 Chapter 10
“It was so homey at the Harmons’ home. Jesu, Joy of Man’s Desiring by Bach was
even returning to me.”
http://www.youtube.com/watch?v=FwWL8Y-qsJg
Again, the performers are not given.

9 Chapter 16
“Richard Strauss’ Thus Spake Zarathustra, the piece that was used for the opening of the move 2001: A Space Odyssey”
http://www.youtube.com/watch?v=Y9QxaJLt7EA
The beginning gives me chills no matter how many times I hear it. You have to turn the volume up a bit at first, but not for long.
Symphonieorchester des Bayerischen Rundfunks, conducted by Mariss Jansons

10 Chapter 17
“a popular melody stuck in my head. Not that popular, actually, but very catchy. And very stuck. The Chicken Dance. Now, how did that get there?”
http://www.youtube.com/watch?v=6UV3kRV46Zs
I can’t resist posting this hilarious version, from the Lawrence Welk Show, performed on accordion, which is so appropriate. Be careful, you might end up like Cressa with this ear worm implanted.

11 Chapter 19
“The theme from Jaws kept rhythm with my wildly thumping heart.”
http://www.youtube.com/watch?v=E-sX2Y0W8l0
I’ve tried to avoid links with ads, but this one is the composer himself, John Williams, conducting the Boston Pops, and you can skip the ad fairly quickly.

12 Chapter 23
“The Song of the Volga Boatmen,” the version I had played in grade school, the one we always sang “Yo Ho Heave Ho” to, thrummed with the waves of pain in my head.
http://www.youtube.com/watch?v=88gLWwq5G5M
The famous Russian Army Chorus, Leonid Kharitonov as soloist. This is in Russian, with shots of the Volga River. If you click the little “cc” at the bottom right of the screen, you can get the English subtitles.

13 Chapter 43
“The ethereal part of Rossini’s “William Tell Overture,” the part with flutes and trills”
http://www.youtube.com/watch?v=g6gzgcGrE2M
This link also has an ad, but another short one. The very beginning might tell you why I think cello is the most beautiful sounding instrument. The part I refer to is at 5:20. The part you’re probably familiar with is at 7:48. Hi ho, Silver! Away!
Gioachino Rossini conducting the Neponset Valley Philharmonic Orchestra

Music Notes Background by Vera Kratochvil
Posted by Kaye George at 4:00 AM