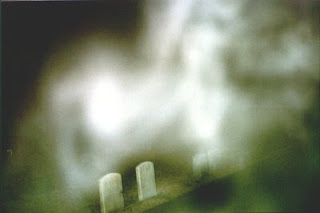 Imogene Duckworthy has a problem in her third adventure, contained in the mystery novel called BROKE. She's rented a house for her, her daughter Drew, and Drew's pet potbelly pig. The leasing agent, Jersey Shorr, tells her there's a rumor that the house is haunted. But Immy is not deterred, since she doesn't believe in ghosts.

If she wanted to exorcise the ghost from the house, could she? Not really. In Western thought, an exorcism can only be performed by a Catholic priest. Even then, it's more to rid a person of demons than to get rid of a ghost.

There are measures she could take, though. Ideally, you want to send the ghost to "the other side" or into The Light. This web page stresses that you should be sober when attempting to persuade a ghost to leave. Burning sage is the accepted method of cleansing your house. This page thinks that ghosts don't need to be gotten rid of, rather they need to be rescued. They just need to be talked into going into The Light. Some ghosts, apparently, are afraid of leaving because they don't think that's exactly where they will end up.

However, I've recently learned (through a short story in Kevin Tipple's collection, Mind Slices)  (which is a very nice bunch of stories) that the concept of that other place wasn't always what it is today. Earlier religions and cultures, pre-Judaism, had a cyclical view of life. For these people, hell was a place to either rest between incarnations, or a neutral zone for dead souls. Early Judaism had no concept of hell, but later developed one that consisted of a place where you go to be purified of your earthly sins so you can ascend to a form of what Christianity now calls heaven.

Anyway, wherever the ghost goes, the important thing for the people in the house is that is goes.

Immy found there were quite a few cultural views of ghosts. The book she bought, The Moron's Compleat Guide to Ghosts, lists these: doppelgänger, a duplicate of a living person; poltergeist, mischief maker but not connected with an actual person; vardøger, a Norse ghost who does things immediately before a real person does them (that would be handy for a fortune teller, she thought); gjenganger, a Scandinavian spirit of someone risen from the grave, but not really ghostlike, more human like; and wraith, a bad omen with a cloak and no face.

Immy didn't think her ghost was any of these! She valiantly plunged ahead, regardless, trying to get rid of the ghost.