Where do writers get ideas? 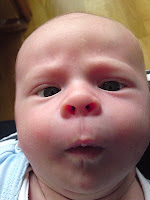 I'm not always sure. Sometimes I probably forget what got me going, but I CAN tell you where I just got my latest from. Facebook.

Facebook, in it's infinite tinkering decided to take away the place where I can find my "lists" that were created for our convenience, as I recall. (This may be faulty memory, too, as far as I know.) They WERE convenient. A mere click at the left and all my friends are sorted into convenient catagories: agents, editors, bookstores, libraries, local writers, famous writers, etc. One of my faves is my "frequent posters" list, by which I mean "too frequent posters". That's where I put all those people that post twenty times in a row. I seldom glance at those, but do every once in a while.

I posted a rant using bad language (in symbols, of course), then did a desperate search for someone that had something to say about lists. I found a discussion on Bill Crider's FB stuff, and even found the answer. Not a good one. To get to the "lists" now requires many extra clicks. You have to be on News Feed, then click Most Recent, then click the little arrow, then click to expand the list that shows up there. Grrrrr.

Now, to get to the topic. When I said I felt a short story coming on (this happens when I'm in a murderous mood), Bill Crider commented that "Facebook and convenience are two terms not often found in the same sentence."

Aha! My title! AS CONVENIENT AS FACEBOOK. This calls for something in the way of farce and bungling, of course. I will make reference to the very scary (to me) shifting staircases at Hogswart. And someone will die.

That, at least, is where that idea came from. I'll let you know if I can write it--and sell it. Bill is asking for ten percent, so I'll have to try to get top dollar for it. Short story writers know how easy that is.