I'm supposed to be promoting the next novel in the Seamus McCree series, Empty Promises. However, I’ve just recently completed a twenty-two-day trip to Antarctica and surrounding islands and that's what I want to talk about. I promise to include some Empty Promises info at the end.

A bit of the Antarctica Peninsula


We visited the Falkland Islands (about which I knew little except that Britain and Argentina fought a ten-week war in 1982), South Georgia Islands (also involved in the “Falklands War”), and the Antarctica Peninsula and nearby islands. My mind is filled with incredible sights of these new-to-me places, the sounds and smells of penguin colonies, the feel of the ship rolling in the waves. My hard drive is filled with 2,740 images. My stomach was filled with too much good food, which I knew at the time and confirmed when I stepped on the scales at home. 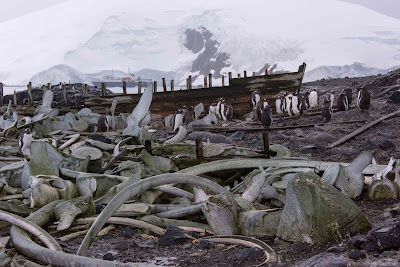 Gentoo Penguins amidst whale bones and an abandoned boat


Wherever we went, we witnessed the legacy of men leaving their marks on the landscape: rusted hulks of abandoned whaling stations, wrecked ships, piles of whale bones, current Argentinian outposts staking their claims on the portion of Antarctica nearest them. The island of South Georgia presents a recent positive change in the ecological damage done by humans. As with most places where whaling and sealing were done, men introduced other animals—sometimes intentionally as potential food supplies or pets, other times unintentionally, as when with Norway rats that stowed away on ships and escaped into the wild. 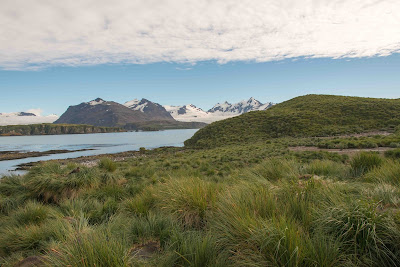 A view of South Georgia Island


The harsh climate and rugged terrain of South Georgia was harsh enough to kill off most of these introduced species. Not rats and reindeer. Browsing reindeer with no predators have a devastating effect on the quality and quantity of plants and were trampling nests of ground-nesting birds such as the pipit and King Penguins. Rats devastated bird populations, eating both eggs and chicks. South Georgia is home to many important seabird and penguin rookeries. It is also home to two endemic bird species, the South Georgia Pintail and the South Georgia Pipit. The pipit had been exterminated on much of the main island and several of the surrounding islands, but still survived on several smaller islands where rats had not been introduced. 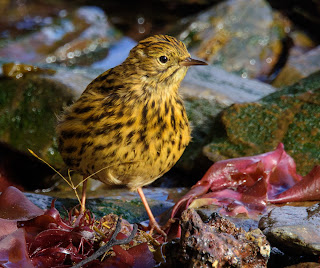 
Beginning in 2011 the British government agreed to help fund an experiment by the South Georgia Heritage Trust to eliminate reindeer and rats from the main island. In a series of carpet-bombing missions following a predetermined grid, helicopters delivered poison packets to the rats. Because of glaciation of the island, the mission could be accomplished over a series of years without fear that the rats from an untargeted region would migrate to a targeted region void of rats. The last phase was concluded in 2015. The project believes the main island is now rat free and has brought in three specially trained dogs to sniff out any remnant populations. They aren’t yet willing to declare victory, but it’s close.

During the rat kill-off, there was collateral damage. Brown skuas eat carrion and ingested the poison second-hand. South Georgia pintails were also adversely affected. I can attest there were plenty of skua around, and the taskforce believes the pintail populations will also expand quickly with the elimination of the rats. 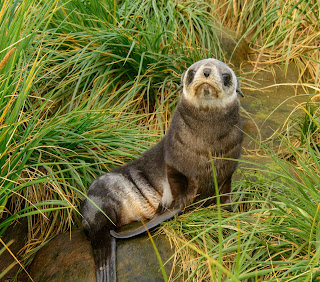 
The 5,000 reindeer on the island were hunted to extermination in 2013 and 2104. Their meat was refrigerated and taken to the Falkland Islands where it was sold to offset some of the cost of the operation.

And it’s not just rats and reindeer they worry about. The government tries very hard to keep out invasive plant species. Before we could land, government officials inspected our clothing and boots to make sure we were not bringing in seeds attached to our clothing. Every time we disembarked and re-boarded the ship we had to clean our boots to make sure we were not tracking vegetation from one island to another. (After visiting penguin colonies, the cleaning also got rid of the poop smell!). On one island my wool gloves picked up several burrs. I carefully picked off all the seeds and was surprised when I later vacuumed the gloves in preparation for another inspection to discover a few seeds had worked their way into the fabric. 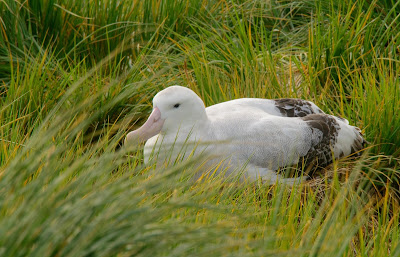 
Since the rat and reindeer eradication, the population of South Georgia pipits has already begun to rebound, and they have returned to several islands where the rats had eliminated them. Unfortunately, populations of many pelagic birds have not rebounded even with the extermination of rats. The birds are drowning by the thousands each year as by-catch from long-line trawlers. The waters within 200 miles of South Georgia and the Falklands are protected by safe long-line practices, but outside of the 200-mile zone, where many of the pelagic birds feed, there is no international protection. 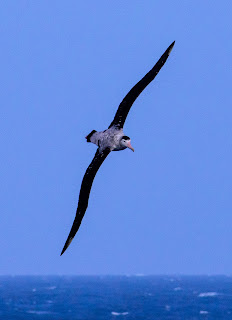 
I know I’ve been blessed to enjoy this trip-of-a-lifetime. I fervently hope that the efforts on South Georgia are replicated elsewhere and the issue of by-catch is resolved so in the future others will have the same opportunities I had to see the avian glory of these magnificent islands. 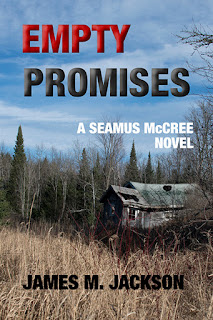 Oh yes, Empty Promises. Here's a quick blurb for the fifth book in the series. This one is set in the Upper Peninsula of Michigan and I'd love for you to read it:

If you love the suspense and plot twists of domestic thrillers, this page-turner is for you. Seamus McCree’s first solo bodyguard assignment goes from bad to worse. His client disappears. His granddog finds a buried human bone. Police find a fresh human body.

His client is to testify in a Chicago money laundering trial. He’s paranoid that with a price on his head, if the police know where he’s staying, the information will leak. Seamus promised his business partner and lover, Abigail Hancock, that he’d keep the witness safe at the McCree family camp located deep in the Upper Peninsula of Michigan’s woods.

Abigail is furious at his incompetence and their relationship flounders. Even his often-helpful son, Paddy, must put family safety ahead of helping his father. Seamus risks his own safety and freedom to turn amateur sleuth in hopes he can solve the crimes, fulfill his promise of protection, and win back Abigail. Wit and grit are on his side, but the clock is ticking . . . and the hit man is on his way.

The Kindle version is up for pre-order. Paperback is either available or will be soon. You can order a signed copy directly from me. If you'd like to see more photos of my Antarctica trip, follow me on Facebook. My website is https://jamesmjackson.com