I’ll bet you’ve heard something about a total solar eclipse in North America this year. Science museums, observatories, many cities in the path, and even the Great Smoky Mountains National Park are gearing up for celebrations.  Yes, a total solar eclipse, but something else, too! An anthology of short stories to celebrate this rare occasion. The anthology is called Day of the Dark and contains 24 short stories, all of them with an eclipse theme, and all of them completely different. 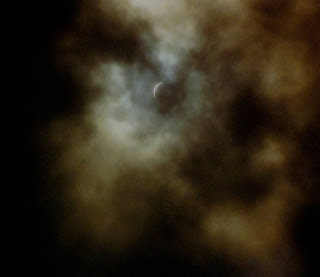 To entice you, I’ll dole out something about each story, bit by bit on this blog over the next few weeks until July 21st, the day Wildside Press is releasing the book. That will be, not coincidentally, exactly one month before the eclipse on August 21st.

Here’s a sampling to whet your appetite for this delicious volume of light and dark:

“The Dark Side of the Light” by Carol L. Wright, set in California, and playing off the possible dark power of the eclipse

“Chasing the Moon” by Leslie Wheeler, set from OR to SC along the path of totality and telling four light-ish stories about how the event affects four different groups of people

“The Path of Totality” by Katherine Tomlinson, an enjoyable political satire set in OR

These four go from dark, to medium, to light, and back to dark, much like the earth will on August 21st in the path of totality, which is the area where the sun will completely disappear in the middle of the day for one to two minutes or so when the moon moves between the earth and the sun and blocks the light, the warmth, the life-giving rays of the sun.