I'm delighted to welcome Nancy Raven Smith to my Travels today and visit...Sumatra! I don't believe I've ever read a book set there. Read on to see how she delved into some fascinating research.

Writing About an Unvisited Location
So you want to set your new writing project in a foreign location you’ve never visited?

Not an unusual occurrence for a writer, and one that happened to me with my debut novel, Land Sharks – A Swindle in Sumatra. 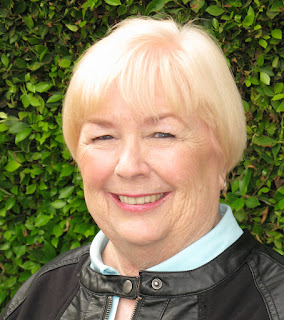 The area around Sumatra was important to my story for it’s history of identity theft and counterfeit identity via forged passports and identity papers. A recent example of this was when two passengers (not involved with its loss) on the Malaysia Airline that disappeared tragically a few years ago, were discovered to be traveling under fake passports bought in adjacent Thailand. Since my new series is all about scams, cons, and frauds, Sumatra was a perfect place to locate my first book.

Then there was the actual island itself. Sumatra is the third largest of the 13,677 islands that make up Indonesia and is the sixth largest island in the world. Physically, it is about the same size, shape, and population as California and full of wild beauty. It’s a rich environment, filled with possibilities that fill the imagination.

What more can a fiction writer want than an island whose western side is lined with ninety-three volcanoes - fifteen of them active. Imagine California with fifteen active volcanoes. On a tiny island just off the southern tip of Sumatra is Krakatoa, one of the most infamous volcanoes in the world. You may have heard of the latest eruptions of Sumatra’s Mount Sinabung. It’s in the northern third of the island and a stratovolcano, as is Krakatoa and Mount Saint Helens in the US. Mount Sinabung has been spewing gas and ash clouds as well as lava for the last two plus years with no sign of stopping. It’s located to the North of Lake Toba, which is a super volcano like Yellowstone.

Rainforests, marsh, and shallow rivers cover a third of the entire island and dominate the topography on the eastern side.

The flora is as fascinating as the topography. There are over 35,000 known plant species in Indonesia. It’s the home of the infamous corpse plant, which smells like purification, and Rafflesia which produces the world’s largest bloom. Hibiscus, jasmine, bougainvillea, lotus, and frangipani are common. Sumatra’s rainforest trees grow over sixty meters tall.

The animals are unique too – 176 different mammals, including orangutans, Sumatran tigers, rhinoceros, elephants, sun bears, clouded leopards, and tapirs as large as ponies. The orangutan exists only in Sumatra and neighboring Borneo.

Reptiles, insects, and aquatic life are just as varied as the mammals. Luckily the fierce Komodo dragons live a fair distance away on a different island. The rare and colorful bird species number 523 including Birds of Paradise, Black Ibis, Sunbirds, pheasants, owls, nightjars, parrots, hornbills, cuckoos, and hawks. The bird population alone fills volumes of books.

The people of the island are as diversified as everything else. Although there are a large number of ethnicities, more than eighty-six percent of the population is Muslim. Christians are the next largest group at a distant second. They are followed by Buddhists and Hindus. Local tribes still exist such as the Batak people in the north.

But sadly, I’ve never been there. So I researched. Researching is definitely a wonderful part of writing. Here’s how I went about it. First, I bought several current travel books on Sumatra. In the front of travel books is always a section on the abbreviated history on an area, a section on flora and fauna, and a section on the people, culture, government, and food as well as descriptions about travel and money. I read these carefully and took notes. Then I bought a large wall map. From it, I got a sense of topography and distances. I picked where I thought the story might take place and zeroed on that specific location. The location changed as I learned more, and I repeated this process several times before finalizing my choice. At the same time, I was still taking notes, searching on the internet, and following things about Sumatra in the news.

Then I went to Amazon and Ebay to see what was available about Sumatra. I ordered and read several first hand accounts of living on the island. I also ordered videos of the area. These actually give you a true visual of the area, especially if you look at the background and not just at what the video focuses on. You also can see how the people sound and look. One video I’ll mention that was absorbing for me was called The Ring of Fire: An Indonesian Odyssey filmed by the Blair brothers as they journeyed through the islands of Indonesia for ten years. It’s old and on VHS (1991) as a 4 tape set, but they also kept a diary and published it. Another program I watched was a much more recent Globe Trekker episode, a Nova episode, and several programs on orangutans. (All on DVD). Another thing I’d recommend if you have the opportunity is to interview someone who has been to the location.

Then I wrote my book. 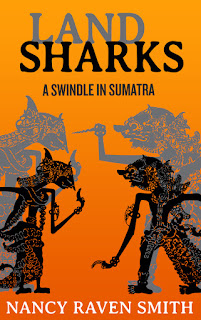 Thank you Kaye for letting me share how I research a location with your readers.

Nancy Raven Smith grew up in where she ran horse sport events. Later in , she worked in film and studied screenwriting at UCLA. Her scripts have won numerous awards, but she decided to write one idea as a novel. To her surprise, she discovered a passion for writing mysteries. Raven Smith realized that she found her true creative home in writing mysteries/romantic suspense. Land Sharks – A Swindle in Sumatra is her first mystery/romantic suspense novel. She hopes people will enjoy reading it as much as she did writing it. She was thrilled when it was chosen as an Amazon/Kindle Scout Program Winner.

In Land Sharks – A Swindle in Sumatra, a bank fraud investigator goes undercover in Sumatra to find a young heiress who may or may not have been kidnapped. Her job might be easier if she didn't have to deal with her boss's untrained son who has a crush on her and the unexpected appearance of an ex-boyfriend who’s a conman with his own secret agenda.         – Mystery/Romantic Suspense