A Giveaway and (maybe) a Short Story Coming Up 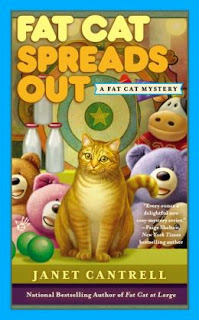 As Janet Cantrell, my other writing name, I’m giving away 15 copies of FAT CAT SPREADS OUT on Goodreads. The giveaway started on the 15th and will go through midnight on the 31st. You still have time, but don’t delay too long!

If you want a sure thing, you can pre-order this very minute. Preorders count for a lot with my publisher, and preorders on the second book are crucial for continuing the series. If you’d like to see the Fat Cat series keep going after the third book (which will come out in March, 2016), a preorder would help out.
Amazon
Barnes & Noble
Kobo
Books A Million

I had the great honor of being asked to write a short story! This has happened in the past, but it’s been a while since the last time. This short is for a Killer Nashville anthology. They’ve contracted with Diversion Books for a series of anthologies. The first will appear in October. If my story is accepted, it will appear in a volume where it fits the theme. The general instruction was to have a twist at the end and that’s something I always love to write! People who have attended Killer Nashville were asked to contribute. Some of the proceeds will go to Killer Nashville charities. My fingers are crossed that I’ll make it into one of them!