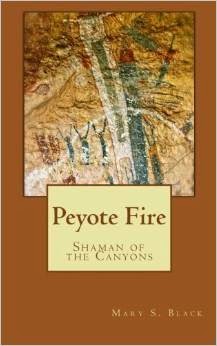 Peyote Fire is set in a real place that still exists on the border of Texas and Mexico, only 4,000 years ago.  The same rivers and canyons are still there, the same dry, rugged uplands.  It’s the kind of place that if you’re driving fast on the highway, you’d never notice the beauty and mystery that exists. But if you prowl among the canyons, you discover magical art on the stone walls and other remains left there by the people so long ago. In fact, over 300 rock art sites have been documented in that area by researchers. What were those ancient people trying to say? The art is so abstract and complex, it is difficult for modern people to understand. We just don’t have the same frame of reference.
That’s what really spurred me to write this book: wondering what the art was all about. Who were those people? What was so important that they wanted future generations to know? The art itself is known as Lower Pecos style and is painted in five colors: red, orange, gold, white and black. Some of the figures could be people, some might be animals, but many others are like nothing we know today.  The pigments were all made from natural minerals.
The protagonist of my book is painting one of these murals, and you can actually visit it today.  I’ve been lucky to tag along with several archaeologists and others to see these paintings, and hear experts speculate about what they all mean.  Sometimes we think that nobody lived in North America until 1620 when the Pilgrims came.  At least that’s what I was taught growing up, but people have actually been here over 12,000 years! They had to be strong and ingenious to survive.
Part of what I want to do is expand our understanding of the people who came before us, and tell a good story while doing it. The people in the book tell many stories around the campfire, and those scenes were particularly fun to write.  I based many of these on Native American myths and folk tales, so there are lots of talking animals, but be forewarned, these are not bedtime stories!
Posted by Kaye George at 3:00 AM