I'm delighted to host a fellow writer of prehistory fiction today, Kathleen Rollins. Please join her journey back in time and across continents. She shares my idea that our ancestors were not dumb savages, but real people. It's so fun to find authors with similar views!

What Lies at the Root of Your Stories

After retiring from teaching composition and literature and doing freelance business and technical writing, I wanted to write my own stories.  Specifically, I wanted to build a big adventure series around the idea that early explorers in the Americas came from many different places at different times.  I’ve always found it hard to believe the Beringia/Land Bridge Theory, which holds that the first people in the Americas arrived here by walking across the Land Bridge from Siberia to Alaska 13,000 years ago and from there populated the rest of the Americas (diagram).  Instead, the explorers in my stories come from West Africa, the South Pacific Islands, and northern Spain.  This is not to say that some people didn’t cross into the Americas through Beringia – just not all of them.

In the Misfits and Heroes stories, I wanted the explorers finding the New World to be both heroic and flawed, capable of the whole range of human emotion and possessed of a relatively sophisticated language.  Absolutely no grunting and pointing dimwits allowed.  It’s simply not credible that people would build housing, make rope, tie knots, handle boats on rivers and open sea, and amass a huge inventory of edible and medicinal plants the way they did at the Monte Verde, Chile settlement, dated to 14,800 years ago, if they had no language.

West from Africa: A Controversial theory

The travelers in the first book in the series, Misfits and Heroes: West from Africa, cross the Atlantic from West Africa to the Gulf of Mexico.  Though archaeologists are reluctant to admit travel across the Atlantic would have been possible 14,000 years ago, open water travel had been undertaken by the original inhabitants of Australia at least 50,000 years earlier.

Wind and water currents would carry West African travelers across the Atlantic right to the Americas.  A young woman named Katie Spotz rowed from West Africa to South America in 70 days – solo – in 2010.

With the help of primitive sails, the travel time for ancient seafarers could be cut in half.  A lot shorter than walking from Siberia, in any case.

Another find bolsters the West Africa thesis: Pedra Furada, a cluster of archaeological sites in northeastern Brazil, which has returned human habitation dates ranging from 32.000 to 48,000 years ago, twenty thousand years before the ice-free corridor is supposed to have allowed humans to travel from Siberia to Alaska and from there to the rest of the Americas. (Pedra Furada rock art, photo)

The closest land mass to northeastern Brazil is Africa, not Asia.  Academic resentment and entrenched thinking stands in the way of accepting this route.  But it drives the plot in my first book.

The group in the second book, Past the Last Island, comes across the South Pacific (marked by the 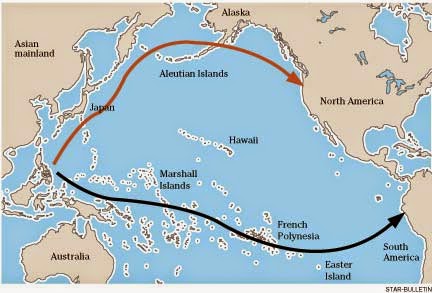 dark line on the map) starting in what is now eastern Indonesia, which would have a cross-roads of cultures from Asia, Australia, and the Pacific Islands). Those banished from their island homes as well as those too restless to stay put would have to set out into the unknown, forced by necessity to learn what they could about new islands, boats, ropes, tools, ocean currents, kelp, shore birds, navigation by stars, whatever anyone could teach them or they could figure out on their own.  Experimentation wouldn’t be a luxury; it would be a necessity, especially as the Ice Age faded and sea levels rose, drowning old coastal villages and the history they held.  A clever misfit might well prove to be a hero when the old ways failed.

Where the travelers in the first book are forced to learn about the sea once they’re drawn out into open water and can’t get back to shore, the expert seafarers in the second book purposely choose to see what lies beyond the edge of the world.  Not as surprising as it might seem at first.  These people were the greatest open water navigators in the world, capable of sailing from island to island, even at night and out of sight of land, charting positions by the stars and reading them by lining up marks on their boats, reading changing currents by lying flat on the floor of their boat.  They sailed from Polynesia to the Hawaiian Islands and Easter Island, both thousands of miles away from the nearest land.  Obviously, they were drawn to attempt the supposedly impossible journey.

In the third book, A Meeting of Clans, members of the two very different groups meet for the first time and change the world.

Animism
In all the books in the series, the people share similar animist beliefs.  They feel all elements of the universe are possessed of a spirit and these spirits together power the world and influence every action within it, including human lives.  Spirits, when active, can take a variety of forms, including human. Signs and omens are terribly important.

While all areas of the natural world possess a spirit, that spirit energy is particularly concentrated in certain places, such as specific mountains, very old trees, deep forest glens, caves, rivers, waterfalls, even particular stones.

The measure of a person would be not just physical stature or possessions but rather his or her connections with the spirit power that flows throughout the universe.  (This basic animist belief is also “The Force” in Star Wars.)

By chance and by choice, some people embraced the spirit connection more than others.  Someone who chose to develop this connection became the shaman, someone who enjoyed the ability to cross between the three worlds (Underworld of the dead, Center World of the living, and Otherworld of the spirits) at the cost of never fully belonging to any of them.  He or she remained the person apart, revered, feared, sometimes resented.  In my stories, shamans have magical powers but they’re also isolated and thus less than fully human.

In rock art images, the shaman is often shown accompanied by animal guides, especially snakes.  Sometimes the shaman seems to be flying, sometimes morphing into something more than human: a human with bird claws and wings, a combination of human and mountain lion, human and stag, or others. 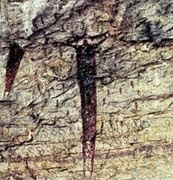 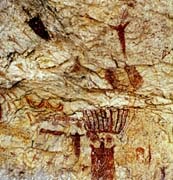 While the concept of the shaman morphing into some other form in order to connect with the spirits may seems fantastic to us, it probably seemed normal to many ancient people. For them, the magical spirit world wasn’t unreal.  Gabriel Garcia Marquez said his fictional world, which many refer to as “magical realism” was simply the world his grandmother spoke of, in which magic was an intrinsic part of the universe, a world that included spirits as surely as it included people and insects, rivers and clouds.

I find this view easy to understand.  Ancient people saw their ancestors in the mountains and their future in the stars.  We see only rocks and points of light. They saw the natural world as their mother and father; we see it as our property to destroy as we wish.  Perhaps we have the smaller, poorer view.

Kaye George asked if my views resulted from my travels.  Yes, definitely.  When I was in Bolivia, I joined a celebration that involved a lot of coca and home brew.  Everyone poured the first drink on the ground.  “For Pacha Mama” one man said, “For Mother Earth.”  It took me a moment to realize, “Yes, of course. She’s giving us this party.”

In a little town in Guatemala, I visited a local cave called La Ventana (The Window).  Ancient Maya saw caves as entrances to the underworld.  Modern Maya leave piles of fresh flowers and rows of candles in La Ventana, some now bearing the images of Christ and the Virgin Mary. The cave is still a portal – a window into the home of the spirits and the dead. 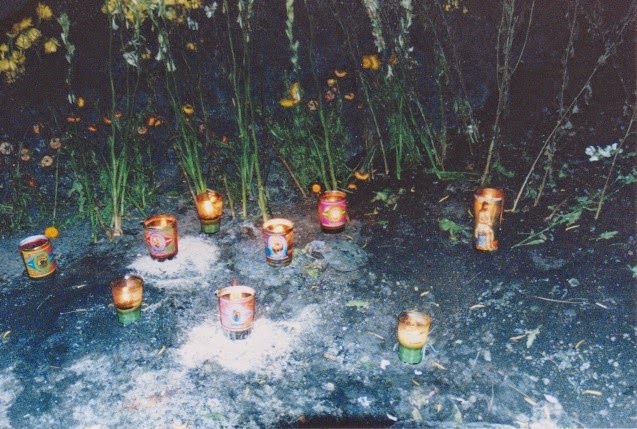 Thank you, Kaye George, for inviting me to talk about my stories!

Here’s the info on the books:

The Misfits and Heroes books are available on line at Amazon.com and Barnes and Noble.

While the books are designed to be a series, you can read and follow any one of them without reading the others.  The books have their own website at www.misfitsandheroes.com and their own blog at http://misfitsandheroes.wordpress.com though I have to say the blog has morphed into a general discussion of all things ancient and their echoes in the present rather than just a discussion of the books.  I hope you’ll check it out!