Marion is a small town in Central Texas with a better than average library. They call it their Community Library because it serves the high school as well as the community in general. This coalition also includes a Book Club! (Writers always like book clubs.) I was invited to speak there this month, after the membership purchased my book, CHOKE, the first in the Imogene Duckworthy series.

My good friend, Kathy Waller, former denizen of that area, drove me part way there and Gale Albright rode with us, too. They got three writers at their meeting that night.

Karen Lavere introduced us and I gave a talk about who I am and how I came to write this series. The audience was lively and had lots of questions, which I love! They had lots to say about my mystery and I enjoyed every minute of the meeting. 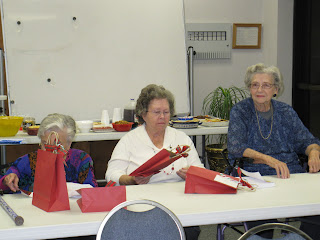 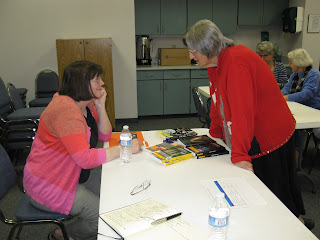 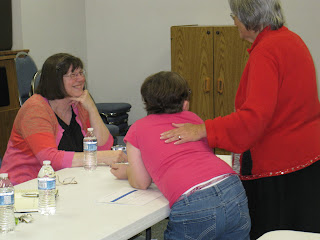 I’ve made such good connections and warm friendships in Texas, it will be hard to leave next year! I’ll be on the look out for book clubs in Tennessee. My real estate agent is a member of one, so there’s a headstart! A fellow Guppy has a sister in a book club near where we’re moving, too. If I’m lucky, they will be two different book clubs and I can try to interest them in my work.

This series, my Immy series, will be put on hold for a bit while I concentrate on the Barking Rain Press book, EINE KLEIN MURDER, coming out in the spring, in time for Malice Domestic (yay!). I’ll also be working hard on the FAT CAT series that will come out from Berkley Prime Crime in 2014. I hope that will be IT for starting a new series every year. I’ll be continuing all of them as best I can.