On Sunday, I was able to take a quick trip to Canterbury, courtesy of Jeri Westerson, whose new Crispin Guest release, TROUBLED BONES, takes place there. Can't wait to read my new autographed copy! 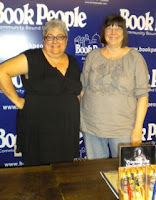 Jeri says that when she found out Chaucer had left his Tales incomplete, she determined, then and there, to finish them up. She waited until the 4th Crispin book to do it, though.

I tell people that Jeri travels with her collection of medieval weapons and the question is always, "How does she get them onto the plane?" They go into the belly of the beast, in a hardcase golf bag. On her trip home from Austin, though, she feared she'd lost them. They were misplaced when she got off the plane in California. They were found, though!

If you ever get a chance to Jeri give a presentation, even if it's without her dueling knights, make every attempt to see her! She demonstrated the proper way to use the sword and the flail and had a knife and a dagger at hand, too. We were all very nice to her. 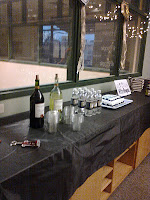 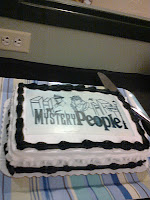 Book People, where she appeared in Austin, was also celebrating the one-year anniversary of its mystery program, the program spurred on there by mystery buff Scott Montgomery.  So we had cake!
Posted by Kaye George at 3:24 PM