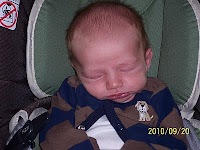 I spent September at my daughter and son-in-law's, part of it awaiting the birth of their first child, part of it helping take care of him (and them) after he arrived.
My daughter had to lie on the couch the last few days to keep her blood pressure down, due to the nasty gestational diabetes she had for the pregnancy. 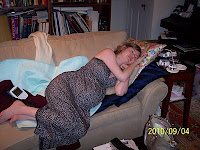 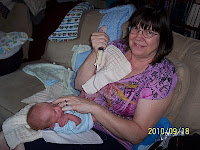 sleepy baby" and didn't want to do his job, which is eating. His mommy refused to give up on the nursing, even though we had to pitch in and
force feed him when he wasn't gaining weight. 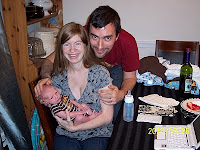 I was able to zip over to son and daughter-in-law's on the way home for Grandparents' Day at my four-year-old granddaughter's preschool. 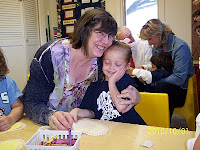 Grandson's second birthday was just before I arrived and his grand present was a nifty train table. 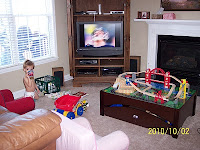 I'm so happy I got to spend time with my far-flung kids and grands. Wish they lived closer!
Posted by Kaye George at 4:18 PM