I did this review in April for Suspense Magazine.

“The Bone House” by Brian Freeman:
Here's a psychological thriller done by someone who knows how to write one. While basically a story of a man and wife, the plot bleeds out to include a detective and and CSI analyst, some troubled teenagers, and a terrible tragedy from the past. The tragedy, portrayed in the breathtaking prologue, reaches lethal tentacles into the future and threatens almost everyone involved.
Mark Bradley is having a tough time. He and his wife, Hillary, moved to an idyllic island in rural Door County, northern Wisconsin, from a Chicago suburb to live on their salaries as teachers and raise a happy family. Mark, however, was accused of sexual harassment when the mother of shy teenaged student, Tresa, read the torrid accounts of an inappropriate affair in Tresa's diary. Tresa insisted her writings were all fantasy, but Mark was fired anyway and has been out of a job for a year. His wife, Hillary is still a dance coach at the high school, but her reception by the locals has become increasingly chilly.
Mark accompanies his wife and her dance students to Florida for a competition. It's supposed to be a relaxing getaway, but Mark is accosted on the beach by Tresa's younger sister, Glory. When Glory is found dead, a witness is found that saw Mark kissing Glory very late at night. He insists they didn't kiss, and that he didn't kill the girl. Hillary wants to believe him, but she's exhausted from standing by him during the ordeal of the past year. And she's not quite sure he's telling the truth.
Cab (Born In One) Bolton, the unusual detective assigned to the case, fights against his attraction to the lovely CSI analyst, Lala. Like Hillary, he doesn't know who to believe. But he's Mark's only hope. And he carries a horrific secret of his own from the past.
Reviewed by Kaye George, Author of “CHOKE: An Imogene Duckworthy Mystery” for Suspense Magazine
Posted by Kaye George at 8:00 AM No comments:

Going Down a New Path

The anthology that came out last week is a departure for me since I've considered myself a mystery writer for the last ten years or so. Before that I tried literary short stories without much luck. Okay, without any luck. Eventually I had a couple of those published, but not before quite a few mystery stories were accepted here and there. (A nearlycomplete list)
My travels, since I started this blog, have chronicled my journey to publication of my mystery novel. There was also inclusion in the Guppy anthology, as well as my short story collection--all mysteries, more of less. I expected the next book to be another mystery.
However, a writing group I've been meeting with is not a mystery group. We're all just writers who met up at an Austin conference. We have found that we all like to write dark tales, among other things. So we got together and put some stuff together. Some of it has been published before, but most of it has not. Mary Ann Loesch has an urban fantasy novel out called NEPHILIM. Steven Metze wrote a zombie book called THE ZOMBIE MONOLOGUES. And I wrote the mystery CHOKE. 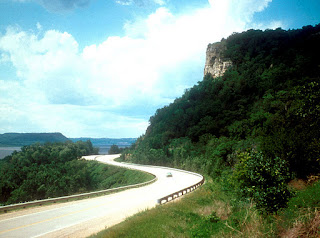 Hence, a new path for me!
As you can see, we're not all writing in the same genre. But, you know what? I don't think that matters any more. I see genres mixed and blending all over the place. So we're joining a trend, really, not starting one, by putting out an anthology together and throwing our genres together. We think it turned out pretty well. If you'd like to see for yourself, the paperback is at Amazon and the ebook is out for Kindle, Nook, and everything else at Smashwords.
Some of these stories would be good to read on Halloween night, after the trick-or-treaters have gone home and the lights have been turned low, the darkness has started creeping into the house, a cold wind is rattling the shutters, and a distant cat is howling.

Photo of Great River Road in Wisconsin from Wikimedia
Posted by Kaye George at 8:00 AM No comments:

Reviews: The Fates Will Find Their Way & The South Lawn Plot

It's been too long since I've posted book reviews! Here are two from the beginning of this year that I did for "Suspense Magazine"

“The Fates Will Find Their Way” by Hannah Pittard:
This is the most unusual book I’ve read in awhile, being in first person plural with lots of verb tenses that would be awkward for many writers. Not for Pittard, though. The story pursues the mystery of the elusive and enigmatic Nora through what-ifs, maybes and might have beens. Possible pasts are explored and discarded, though some are held onto by the group of boys as they progress through high school into adulthood.
It starts as an angst-ridden drama of newly hormonal teenagers. When one of their group, Nora, goes missing, the group considers alternate scenarios to explain to themselves, collectively, what happened to her. It’s an elitist bunch of boys who permit one “public schooler” into their midst, but only on the outskirts. In spite of this, we come to appreciate them and sympathize with their difficulties. Nora disappears on Halloween, and subsequent Halloweens are never again normal events for them. One of their female classmates is raped by a big brother of another classmate and they are tenderly protective of her. Nora’s younger sister, Sissy, is perhaps the mostly profoundly affected by her sister’s disappearance and unresolved fate. The boys close solicitous ranks around her, too, as much as they can.
The reader watches in fascination as the boys mature and become the men that their teenage years laid foundations for. And, always running through their lives, even as they marry and have children, are the questions surrounding Nora. The fantasies they form are fed by sightings over the years that may or may not have really been Nora. They create alternate lives she might have, would probably have or could have led.
There are some hilarious scenes, but most are serious and give the reader plenty of fodder for speculation and thought.
I hope you’ll enjoy this book as much as I did. In spite of the unusual literary style, it’s readable, even flowing and my interest never ever flagged.
Reviewed by Kaye George, Author of “A Patchwork of Stories”, for Suspense Magazine
“The South Lawn Plot” by Ray O'Hanlon:
I think you have to call this a thriller, technically. It doesn't quite move like one, but the cast, geography and tangled plot are complex—gigantic even. There's a lot to recommend here as we follow Nick Bailey, a reporter, into a story that starts out murky and gets deeper and deeper into a real, pea-soup fog.
The interwoven plots involve an odd, religious order with roots in the 1600s. The present day priests of that order: a wealthy Taiwanese businessman with a grudge and a terminal illness, a famous photographer who has a much darker sideline occupation, a frustrated, Irish freedom fighter and the top political figure in the world. Their conspiracies snowball. Nothing will stop them except, perhaps, Nick, the intrepid and courageous reporter and a few British police officers who stand in the way. Some American counterparts come into play also as we skip from continent to continent and world-wide war looms if the diplomacy isn't handled exactly right.
From the beginning, with dangling suicidal priests, these disparate groups weave a tangled plot whose strands gradually twine together to create a rope of intrigue that may be too strong to be broken. Throw in MI5, MI6 and a few American agencies and you've got a potboiler. A very satisfying read.
Reviewed by Kaye George, Author of “Choke”, for Suspense Magazine
Posted by Kaye George at 8:00 AM No comments:

Two wonderful libraries have hosted me in the last week. The Taylor Library held their annual Gala fundraiser on Thursday, the 13th, and invited 14 writers and an artist as guests. The theme was Western and a great country band played for us while everyone munches delicious goodies, took advantage of the drinks, and chatted. We even sold some books.
Then, on Saturday, the Pflugerville Library threw their doors open to three mystery writers and local radio book reviewer, Hopeton Hay. Robin Allen, Janice Hamrick, and I discussed mysteries and mystery writing with an attentive, appreciative audience and, again, we got to sell books.
But, more important than selling books, on both occasions writers got to connect with readers and it was great fun.
Posted by Kaye George at 8:00 AM No comments:

A get-together in Pflugerville

Hopeton Hay, who hosts the KAZI Book Review in Austin, will lead a panel discussion that I'm participating in as the author of CHOKE.  The other two authors are RobinAllen (IF YOU CAN'T STAND THE HEAT) and Janice Hamrick (DEATH ON TOUR).
All three of us have done radio interviews with him and I can vouch for his skill as an interviewer. (Mine is here.) It should be a good event!
If you're in the Austin area, we'll all be at the Pflugerville Library on October 15th, 1-3:00 pm, discussing our present novels, future plans, and taking questions from the audience.
I hope to see some of you there!
Posted by Kaye George at 11:50 AM No comments: 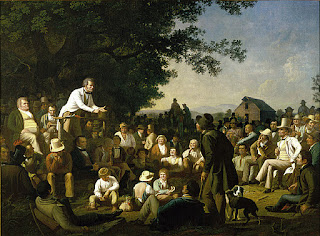 If you read my post last week, you know that I gave a talk. It wasn't very stressful, mainly because my audience was tiny and I felt I was just sitting in a room talking, not actually "giving a speech". (I like the quotes that way, OK? OK?)
However, I'm slated to give a longer speech, and to more people--tomorrow! Yikes! Why do I say I'll do these things? For some reason, I think I'm supposed to, that giving talks makes me a better (stronger?) person. Face your fears, right?
In this case, because I was asked and it was so flattering that I couldn't say no. It's a talk I gave over a year ago, updated. The person who asked, me, Sylvia Dickey Smith, heard the first version and must not have thought it stunk that bad. The truth is, my delivery is not the best. My paralyzing fear prevents me from being natural. Or it did the last time I gave this talk. It's about getting your name known as a writer, by the way. So much has changed with social media and publishing that I had to update it significantly!
In the months since I gave this (almost) same talk, I have done a few public appearances and hope I'm better at it now. After all, I've done a radio interview. I've also sat on a dais in front of many people on panels at conferences, but in those cases, I draw strength from the numbers sitting at the table with me. I'm going to pretend I'm at a conference, at one of those tables. Or maybe that I'm at the talk I gave last week with three people listening intently.
These two posts have helped a lot and I'll link you to them in case you're giving a talk soon. Ramona DeFelice Long, who has no trouble getting in front of people, gave tips for the performance author on the Sisters in Crime blog, Parts One and Two.
These were just in time for me! I hope they help some other people, too.
If you belong to the San Gabriel Writers' League, I'll see you tomorrow at the library in Georgetown!
Painting: Stump Speaking by George Caleb Bingham, public domain from wikimedia
Posted by Kaye George at 7:00 AM 7 comments: