The Kindness of Strangers (and Friends)

I'm depending lately, on the kindness of so many people. And they're coming through!

Since publishing my short story collection on a whim, as an ebook (A PATCHWORK OF STORIES), I decided to do some publicity on it. I'm sort of using my ebook as a test run for when my trade paperback novel, CHOKE, comes out in May from Mainly Murder Press. It might be good, I figured, to try out different marketing tools on the ebook and see if I have phenomenal success with any one thing. Or more than one.

I added my book to my signature line. For the first few weeks I put links to the purchase sites on Smashwords and Amazon. Then I thought that might be annoying and took those off. The links are front and center on my webpage, though.

Let me back up a sec, though. First, I had started publicizing my novel and put it in my signature line. Things I've done to get the word on on it (although it doesn't come out until May 2011):

*make sure I post on the lists I belong to so my signature line gets seen (not a problem, since I'm always posting anyway);

*get a new author photo and put together a preliminary press kit, and put it on my webpage;

*start consciously acquiring new Facebook and Twitter followers (20/day was recommended to me, but I haven't hit that yet);

*register for a couple of big conferences next year, try to get onto panels, donate a silent auction basket at one, buy a group ad at another;

*and, lastly, get myself onto other people's blogs as a guest once a month until my pub date.

Here's where the friends and strangers came through, on that last one. And, in the midst of this, I put out the ebook and sort of switched my efforts over to it. So, the blogs are more about the short stories now, with just a mention of the coming novel.

I'm overwhelmed by people who have spontaneously blogged about me, and those who have offered me spots and interviews. Since August, I've averaged more than one every month.

Take a look at all the great publicity!

My blogmates at Dialog For Murder

A two-part in depth interview at Writers Who Kill, by E.B. Davis

A nice essay from KB Inglee

A review of the short story book by Judy Alter

And an interview by David Wisehart, who promotes Kindle authors

I will have a guest blog at Lelia Taylor's Buried Under Books blog Saturday!

December and January are mapped out with one each so far, and several are lined up for May. I can NOT thank these folks enough for all of this!

Since putting the ebook on Amazon, I also created an Author Page for them. I guess I can add the new book in May to that. I have no idea who looks at those.

What works? What doesn't? That's what I'll try to decide as I go through the process for both books. Maybe some things work better for ebooks and some work better for print books. So far, with the only one for sale, A PATCHWORK OF STORIES, there's been a steady trickle of one or two sold every day or every other day. I'm kind of amazed at this. And anxious to see if anyone will buy the print version when it becomes available later this month (I hope). Right now it's at Smashwords and Kindle (hint, hint). 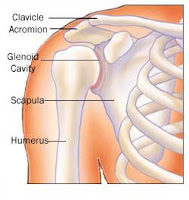 A PATCHWORK OF STORIES is at Amazon for Kindle now. I got it done before my surgery on Wednesday immediately sold some. Yay!
It is dang hard to keyboard one-handed, so this will be short. I'm in a sling for awhile, but should have a better than new shoulder eventually.
Image from AidMyRotatorCuff.com
Posted by Kaye George at 6:14 PM No comments: